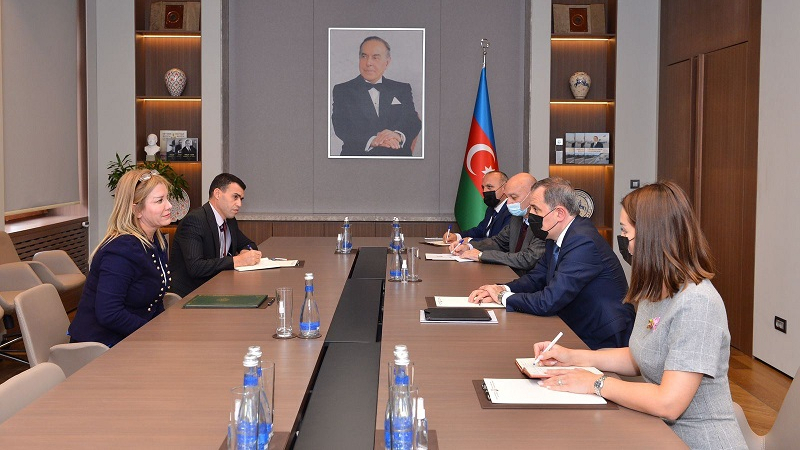 On October 25, Azerbaijani Foreign Minister Jeyhun Bayramov received the Ambassador Extraordinary and Plenipotentiary of the People’s Democratic Republic of Algeria to Azerbaijan Salima Abdelhak on the occasion of the completion of her diplomatic mission, the Foreign Ministry told News.Az.

Minister Bayramov highly appreciated the ambassador’s efforts for the development of bilateral relations and wished her success in her future endeavors. Highlighting the high level of political dialogue between Azerbaijan and Algeria, the minister noted the good opportunities for further development of these relations in various areas.

Minister Bayramov broadly informed his interlocutor on the new post-conflict situation in the region and the concrete steps taken by Azerbaijan to implement the trilateral statements. It was also said that new opportunities for cooperation in the region have been created after the elimination of the factor of occupation of the territories of Azerbaijan.

The minister also noted the contacts with his Algerian counterpart on the sidelines of international gatherings, despite the limitations on direct contacts caused by the pandemic. He highlighted that the two countries successfully cooperate within international organizations, including the UN, OIC and NAM.

Ambassador Abdelhak expressed gratitude for the support provided to her during her diplomatic mission and spoke with satisfaction about the development of relations between Algeria and Azerbaijan. The ambassador stressed that Algeria has always been guided by the norms and principles of international law, and in this regard, Algeria supports Azerbaijan’s position which is based on international law.

During the meeting, the sides discussed the prospects for the development of relations between the two countries.