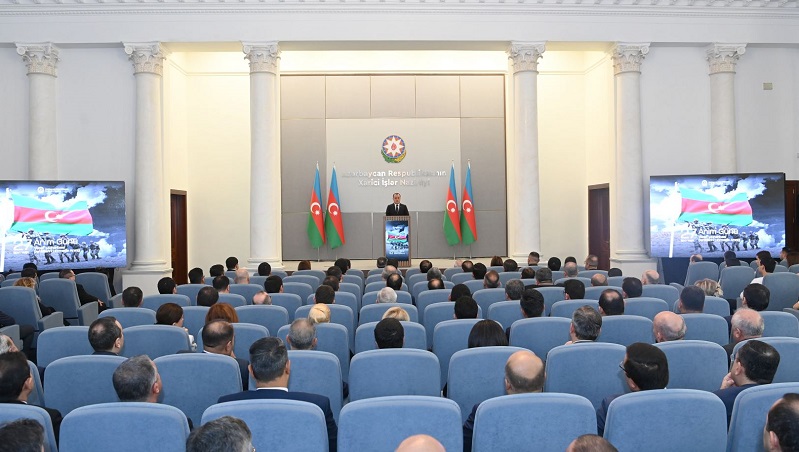 The leadership of the Foreign Ministry, participants of the second Karabakh war, and families of martyrs participated in the event, the ministry’s press service told News.Az.

The ministry first made a statement in connection with Remembrance Day. Then a video dedicated to the Second Karabakh War was screened.

Speaking at the event, Foreign Minister Jeyhun Bayramov noted that two years ago, on September 27, the Azerbaijani Armed Forces took retaliatory measures to prevent another military provocation from Armenia, which marked the beginning of the second Karabakh war. As a result of the war, the heroic Azerbaijani army under the leadership of the victorious Supreme Commander-in-Chief President Ilham Aliyev ensured both international law and historical justice.

He said that families have already been resettled in Aghali village of Zangilan district, stressing that the large-scale restoration work carried out on the lands liberated from occupation serves to create safe conditions for the return of internally displaced persons who were forcibly expelled from their homes several decades ago.

Bayramov also noted that, despite the fact that in the post-conflict period Azerbaijan made a number of efforts in connection with the process of normalizing relations between the two states, the Armenian side continues to commit provocations.

He addressed the children of martyrs, who took part in the event, and said that Azerbaijan is proud of their fathers. He respectfully honored the memory of the martyrs who gave their lives for their country.

Later, the blessed memory of the martyrs was honored with a moment of silence.