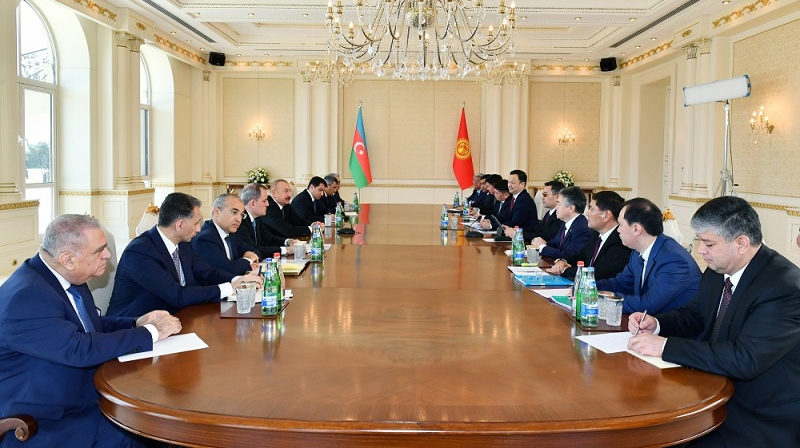 “This is a very significant event, because during the 29 years of our interaction, we have worked in a number of areas, of course, but our relations were not at this level. A strategic partnership means both great benefits and great responsibilities. I am confident that we will always support each other in international organizations and actively work in a bilateral format in the future,” the head of state noted.

The Azerbaijani leader said he discussed with his Kyrgyz counterpart a number of issues related to investment projects.

“I am confident that based on the results of the visit, we will lay out a specific program for the implementation of the agreements reached. Of course, I think it will be necessary to hold a meeting of the intergovernmental commission in the near future. The commission last met three years ago,” he added.

Sadyr Japarov, in turn, thanked President Aliyev for inviting him to visit Azerbaijan.

President Japarov noted that without the strong foundation of the modern Kyrgyzstan-Azerbaijan relations, bilateral relations would not be possible. “These are deep historical and spiritual ties between our peoples. In this regard, we are pleased to note that there are no political differences between the two countries. Therefore, we are obliged to take advantage of this opportunity and expand our cooperation on behalf of the fraternal peoples of the two countries by combining our constructive efforts,” the Kyrgyz leader said.

“The profound changes taking place in the world today are giving us a historic chance to build a new type of relationship. These relations are based on ancient Turkish values such as dignity and honor,” he added.