Azerbaijan's Speaker: Armenia demonstrates a destructive attitude to the conversations going on through international efforts 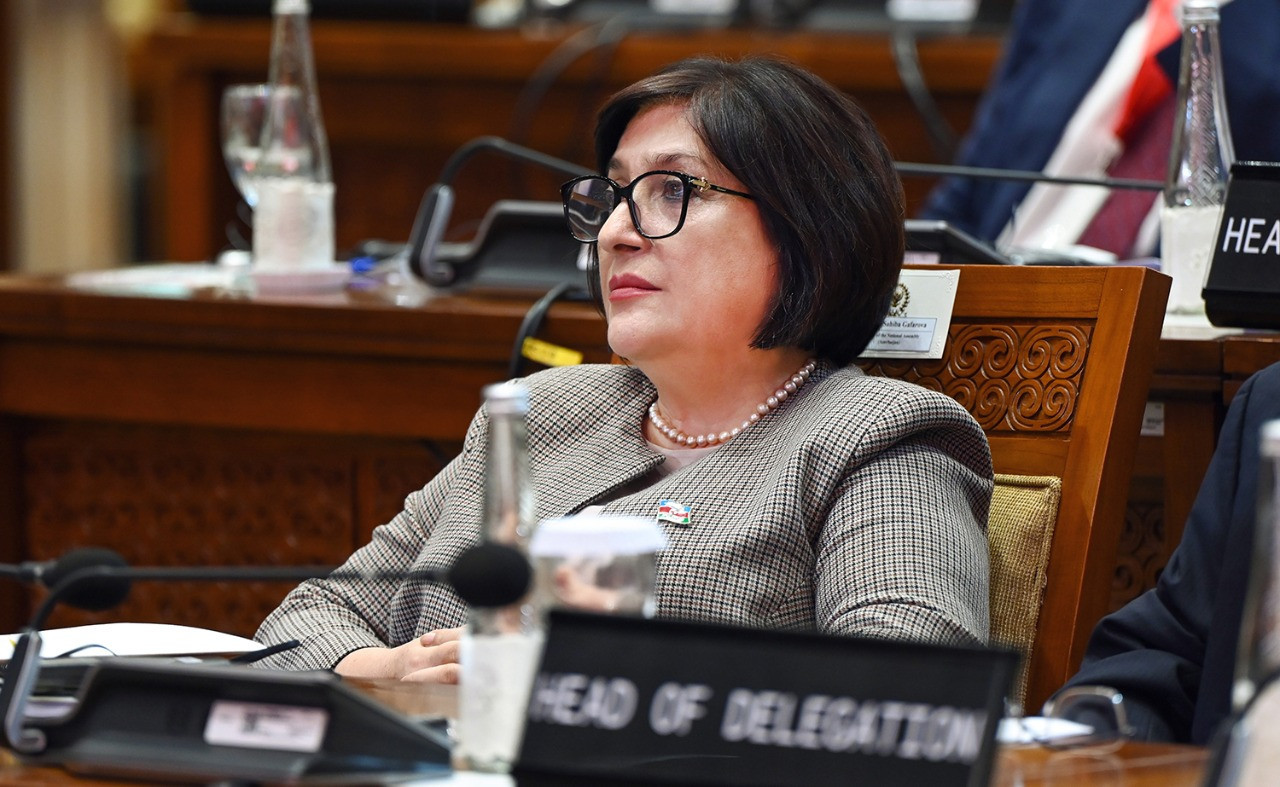 Chair of Azerbaijan's Milli Majlis Sahiba Gafarova delivered a speech on 5 October at the 8th summit of the G20 Parliamentary Speakers current in Jakarta. Mrs. Gafarova first thanked Speaker of the People’s Representative Council of the Republic of Indonesia Puan Maharani for the invitation to the summit and then emphasized its extremely important and relevant topicalit,  the Press and Public Relations Department of the Milli Majlis told News.az.

According to Madam Speaker, poverty, the humanitarian crisis and conflicts, social inequality, climatic changes, and other modern challenges are impossible to overcome alone. One of the most useful lessons that the COVID-19 pandemic taught the whole world was that global challenges require global solutions, and that collective effort and joint activities are essential. Parliamentarians as representatives of their peoples ought to take part in the discussions held to find the best solutions for the problems of universal concern. The legislatures’ cooperation platforms prove the undertaking and resolve to pursue joint endeavors for a better world. The P20 summit is very important in this sense as it is an event capable of defining what roles the parliaments could play and of determining what contributions they can make to addressing the present-day problems. This summit also matters as a muster point for parliamentarians and as a venue where various aspects of the parliament-government cooperation can be discussed in an overarching manner.

A propos, Sahiba Gafarova brought up another inter-parliamentary co-operation, a newly-founded one – the Parliamentary Network of the Non-Aligned Movement. She provided her audience with detailed information about this entity, the emergence of which is the result of the initiative that President Ilham Aliyev of the Republic of Azerbaijan had put forth as the incumbent NAM Chair. The emergence of the Network highlights Azerbaijan’s firm support for inter-parliamentary cooperation and dedication to it. Azerbaijan had also proposed a further extensification and intensification of the linkage and collaboration amongst the NAM parliaments. So, the Parliamentary Network was established on the margins of the 143rd Assembly of the Inter-Parliamentary Union in Madrid in November last year. Then, on 30 June-1 July this year, Azerbaijan hosted the Network’s Baku Conference which was a formidable phase in the novel organisation’s evolution. Its charter, official logo, and flag were adopted, and its Chair and Deputy Chairs for the next three years were elected at the conference attended by the parliaments of more than 40 member-states and 8 international parliamentary organizations. It is planned to hold the next conference of the NAM PN on the sidelines of the 146th IPU Assembly in Manama in March the coming year. Sahiba Gafarova as the incumbent NAM PN Chair said she was confident that the Network was going to become a serious platform upon which to promote multilateralism, dialogue and inter-parliamentary cooperation. She added that the Network was also prepared to make input in achieving common goals through active interaction with the other parliamentary institutions.

Substantial steps are being taken under the Azerbaijani chairmanship to ensure the advancement of the Non-Aligned Movement itself as well, according to the leader of the Milli Majlis. Amongst those steps are the inception of the NAM Youth Organisation on the basis of the Youth Network and the instalment of a NAM support office in NYC in July this year. On the other hand, a special session of the UN General Assembly devoted to the COVID-19 pandemic was convened upon the instance of the President of the Republic of Azerbaijan in December 2020. That as well as the adopted resolutions about ensuring an equitable, affordable, timely and universal access to the COVID-19 vaccines and the initiative of the leader of Azerbaijan Ilham Aliyev to form a UN High-Level Panel to generate recommendations concerning post-pandemic global recovery spell Azerbaijan’s contribution to international co-operation as much as they do the importance that Azerbaijan attaches to formulating a collective approach to solving global problems.

Sahiba Gafarova emphasized that, if we want the common effort to eliminate international-scale problems to come to fruition, we should strengthen the international institutions, enforce adopted documents and put an end to double standards and selective approaches. The leader of the Milli Majlis mentioned regretfully that countries often suffer in the face of such a stern reality. Azerbaijan is no exception since her own experience had shown her how that reality could be. Mrs. Gafarova mentioned in this connexion the almost 30-year-old Armenian occupation of 20 per cent of the territory of Azerbaijan is recognized as such internationally. She also referred to the ethnic cleansing by Armenia in those lands – the practice that had made more than a million Azerbaijanis refugees and displaced persons. About 4,000 citizens of Azerbaijan, civilians and servicemen alike, are still missing the consequent of that conflict. Armenia, meanwhile, had demolished all of Azerbaijan's towns and villages in the captured provinces and had vandalised all the historical, cultural and cult artefacts and sites of Azerbaijan during the years of occupation. The four resolutions that the UN Security Council passed in 1993 as well as the resolutions and decisions of the UN General Assembly, the Non-Aligned Movement, the OSCE, the Organisation of Islamic Co-operation and of other international establishments demanded the immediate, complete and unconditional withdrawal of Armenia’s armed forces from the Azerbaijani territories they had captured. But Armenia had ignored them all. While some resolutions of the Security Council are acted upon with a matter of days, those that concerned the occupation policy of Armenia had remained on paper for as long as 27 years. Alas, there had been no sanctions of international organizations upon the occupier state. In the end, Azerbaijan resorted to her own resources and devices to enforce the resolutions of the UN Security Council as well as the international law’s standards and principles whilst also restoring both the integrity of her territory and the historical justice. The 44 day Patriotic War that began in response to an armed provocation of Armenia in September 2020 resulted in the occupier state being reduced to signing a surrender act in November that same year.

Speaker Gafarova continued her speech to tell her audience of the on-going post-war efforts of Azerbaijan to establish lasting peace and stability in Azerbaijan's region. Moreover, she said, Azerbaijan had offered a normalisation of the relations with Armenia and signing a peace treaty based upon five principles of international law. Mutual recognition of sovereignty and territorial integrity, delimitation and demarcation of the borders will lead to peace and stableness in the region. But Armenia demonstrates a destructive attitude to the conversations going on through international efforts. Armenia is obstructing the opening of communications and transport routes in the region. This process is equally hindered by the latest Armenian military provocations of 13 September this year. Such conduct needs condemning. The most important thing to do right now is to avoid making any move likely to harm the normalisation because the normalisation happens to be the only path to long-term peace and constancy in Azerbaijan's region.