France takes over EU presidency with push for more sovereignty 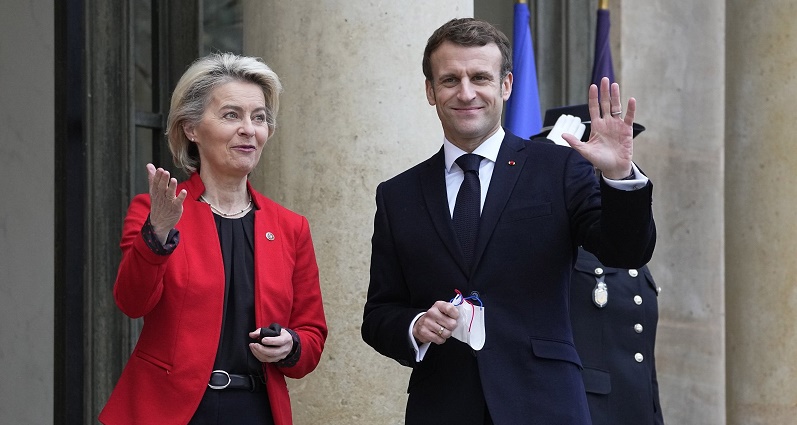 French president Emmanuel Macron paid tribute to a pair of leading European figures Friday as France formally took the reins of the 27-nation bloc for the next six months with big ambitions, AP reports.

Macron was accompanied by the head of the European Union’s executive arm, European Commission President Ursula von der Leyen, at France’s famed Pantheon to honor the memories of Simone Veil and Jean Monnet.

Veil was a Holocaust survivor who repeatedly broke barriers for women in French politics and spearheaded the fight to legalize abortion, while Monnet was a founding father of the European Union.

Both Macron and von der Leyen wore masks during the visit inside the domed building, amid a wave of coronavirus cases that somewhat overshadowed the beginning of the French tenure and caused trouble for the French leader ahead of the arrival in Paris of EU officials.

Macron, who is expected to seek re-election later this year, made headlines earlier this week by using rude language in reference to the country’s minority of unvaccinated people.

In an interview with a newspaper, Macron described his strategy for pressuring vaccine refusers to get coronavirus jabs by using the word "emmerder” – rooted in the French word for "crap” and meaning to rile. His vulgar language dominated news broadcasts and provoked angry reactions from his political rivals.

To move things forward on the continental stage on the vast array of touchy topics he wants to tackle, Macron will need to adopt a more consensual tone with his EU counterparts.

A leitmotiv of the French presidency over the next six months will be the need for greater autonomy for the 27-nation bloc.

Macron has been championing the idea since he took power five years ago and will use the rotating presidency of the Council of the EU, which sets the political agenda of region, to try to put it into practice.

Among the main themes France wants to promote are the introduction of an EU minimum wage, a carbon tax on imported products and reform of the EU's fiscal rules. France also wants to accelerate discussions between member states to find a consensus on the stalled overhaul of the bloc's asylum system.

Detailing the goals of the French presidency, a senior French government official said the EU needs to be more sovereign to be in a position to make its own choices while defending its ideals of democracy.

"There is a risk for Europeans to simply go out of history," the official said. "In the sense that we would no longer contribute to writing the history of the world, and others would come and write our own history. There is an existential danger."

The official spoke anonymously because he was not authorized to speak publicly ahead of the EU commission visit to the French capital city.