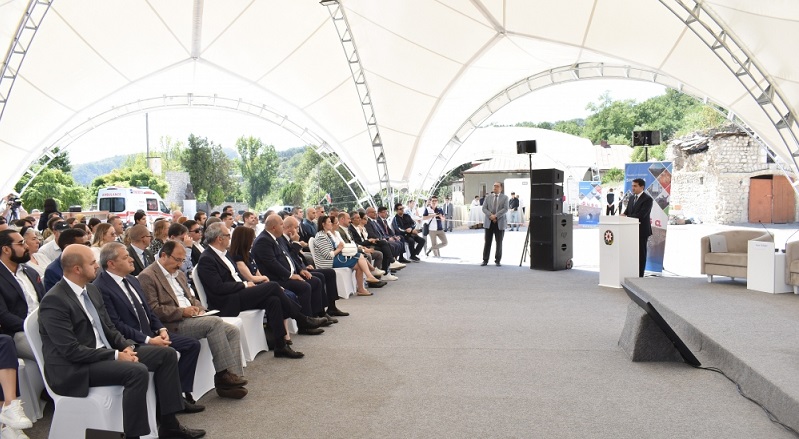 On August 27, a conference dedicated to the restoration and reconstruction of the liberated Azerbaijani territories, the mine-clearing operations and the use of the urban development potential in the post-conflict period, and opportunities for international collaboration started in Shusha, the cultural capital of Azerbaijan.

The event brings together 160 delegates, including foreign ambassadors, non-resident ambassadors accredited in Azerbaijan and working in Ankara, Tehran and Moscow, representatives of diplomatic corps and international organizations, military attachés, as well as officials of Türkiye’s Foreign Ministry and other state bodies.

The importance of the arrival of diplomats and military attachés from Türkiye in Shusha by Ankara-Fuzuli flight should be specially emphasized.

It is worth noting that the ambassadors of the United States and France in Baku, as well as representatives of these two countries’ embassies, sticking to their habits, once again refused to join the visit to the city of Shusha and witness the restoration and reconstruction work Azerbaijan is successfully carrying out in its liberated territories.

Such a move by the US and France is regrettable and unacceptable. At the same time, this double-standard approach contradicts diplomatic etiquette and all efforts aimed at normalizing relations between Azerbaijan and Armenia.

Although Washington and Paris have repeatedly voiced their support for the territorial integrity and sovereignty of Azerbaijan within internationally recognized borders, the open refusal by the embassies of the US and France of the invitation to send their ambassadors or representatives to the liberated Azerbaijani territories is another testimony to a double-standard policy of both countries towards Azerbaijan. All this once again proves that these countries only pursue self-interests.

At the same time, all this calls into question the US and France’s desire and attempts to contribute to the normalization of relations between Azerbaijan and France.