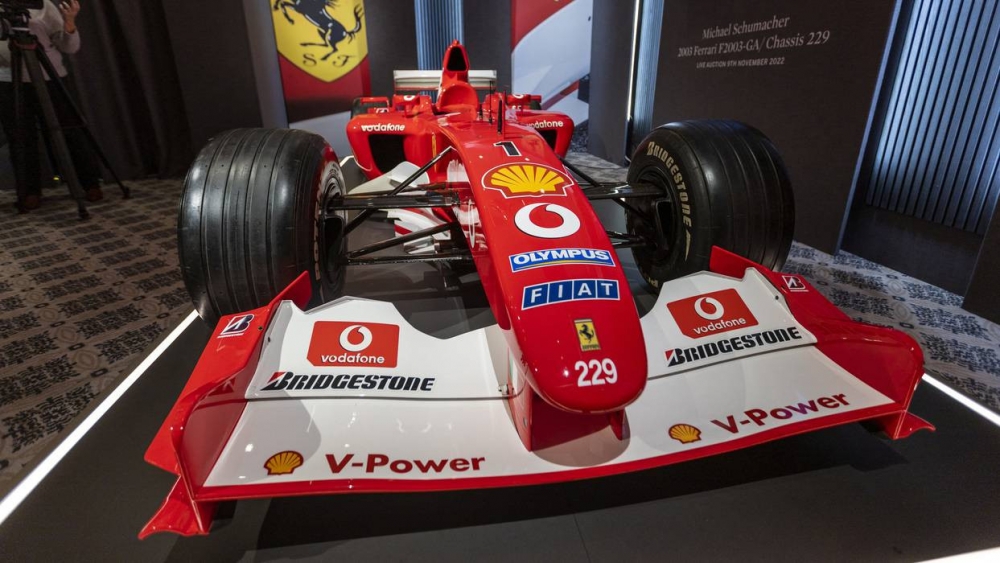 Michael Schumacher’s 2003 Ferrari has sold for $13.2 million at an auction in Switzerland, making it the second-most expensive car ever sold, News.Az reports citing planetf1.

The Chassis 229 was driven to seven race victories during Schumacher’s title winning 2003 season and was one of just four Schumacher-era Ferrari Formula 1 chassis with five wins or more in a World Championship winning season.

It was put on auction in Geneva by Sotheby’s and fetched 13 million Swiss francs ($13.2 million) from a telephone bidder.

The car has exceeded expectations with Sotheby’s Auction House, who were in charge of the sale, initially predicting that it could fetch up to $9.4 million (£8.3 million/€9.4 million).

The sale means that Schumacher beat his own record having previously seen his 2001 Ferrari F2001 sold for $7,504,000 at a Sotheby’s auction in New York.

“This extraordinary car has reached a world record price for a modern Formula 1,” Sotheby’s, the auctioneer said.

The car was also given Ferrari Classiche’s “Red Book” Certification which means it was restored to its original condition with parts either being repaired or replaced.

It has a V10 engine, one of the last to be used in Formula 1, and has only been run for 148 miles since it was restored at the Maranello factory this year.

The F2003-GA featured new developments including a longer wheelbase to improve aerodynamics with the intention to optimise its set-up on the Bridgestone rubber by shifting its weight bias to the rear during qualifying.

Ferrari could then move it forward in order reduce wear on the rears. The car also produces 930-bhp and has a rev limit of 19,000 rpm.

It seems unlikely that the top spot will ever be beaten though with a sum of nearly $30 million gone into purchasing the 1954 Mercedes W196R at the Goodwood Festival of Speed in 2013.