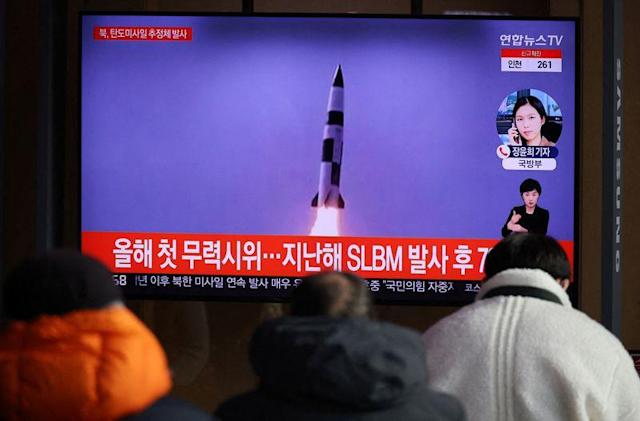 The presumed missile was fired around 8:10 a.m. (2310 GMT) from an inland location, over the east coast and into the sea, South Korea's Joint Chiefs of Staff (JCS) said.

A few hours later, Moon visited the South Korean east coast city of Goseong, near the border with the North, where he broke ground for a new rail line that he called "a stepping stone for peace and regional balance" on the peninsula.

In remarks at the ceremony, Moon acknowledged the launch raised concerns of tensions and damage to inter-Korean relations, and called for North Korea to make sincere efforts for dialogue.

"We should not give up the hope for dialogue in order to fundamentally overcome this situation," he said. "If both Koreas work together and build trust, peace would be achieved one day."

The apparent missile launch by the nuclear-armed North highlighted the challenges Moon faces in his push to achieve a diplomatic breakthrough before his five-year term ends in May.

Reconnecting the two Koreas by rail was a central issue in meetings between Kim and Moon in 2018, but those efforts went nowhere as talks aimed at convincing North Korea to surrender its nuclear weapons in exchange for easing international sanctions faltered in 2019.

Kim's New Year speech made no mention of efforts by South Korea to restart negotiations or offers by the United States to talk, though analysts noted that doesn't mean he has closed the door on diplomacy.