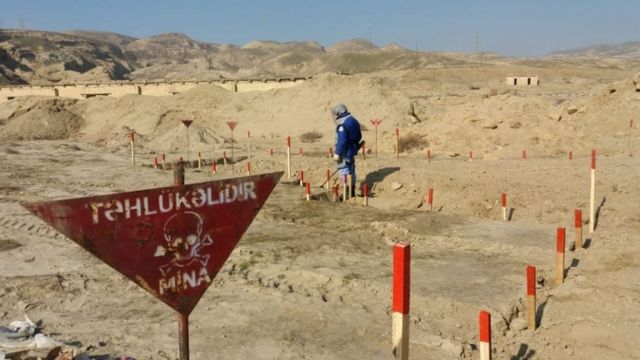 Anti-personnel mines are massively being detected in the territory of Azerbaijan’s Lachin region, the country’s Defense Ministry and the Azerbaijan Mine Action Agency (ANAMA) said in a joint statement on Wednesday, News.Az reports.

From August 15 to August 31 of the current year, a total of 1318 PMN-E mines have been detected in the anti-personnel minefields in the Lachin region.

The detected mines were produced in Armenia in 2021 after the Patriotic War, said the statement.

It should be noted that according to international humanitarian law, the Ottawa Convention, adopted in 1997, bans the production, storage, transportation, and use of anti-personnel mines.

In addition, by laying anti-personnel mines in the territories liberated from occupation, Armenia violates the requirements of Additional Protocol I to the Geneva Conventions of 1949 and disrespects the international community by officially declaring this.

“The scale of the anti-personnel minefields laid by Armenia is a manifestation of mine terror. All of this is a deliberate crime against peace and security in the region and the environment, which once again demonstrates the hostile intentions of Armenia,” the statement added.