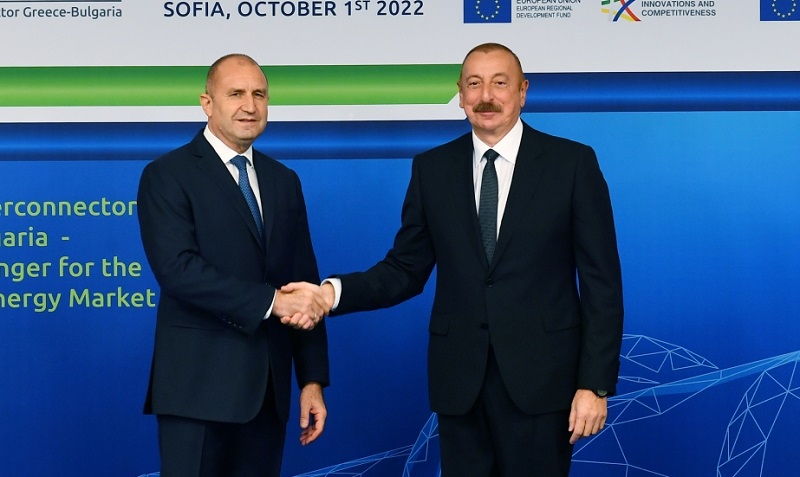 A ceremony to inaugurate the Gas Interconnector Greece-Bulgaria (IGB) has been held in Sofia, Bulgaria, News.Az reports.

President of the Republic of Azerbaijan Ilham Aliyev attended the event.

President of Bulgaria Rumen Radev welcomed President of the Republic of Azerbaijan Ilham Aliyev and other heads of state and government.

The event featured the screening of a video on technical indicators of the interconnector and the importance of the project.

The screening was followed by speeches.

The head of state made a speech at the ceremony.

The total length of the Greece-Bulgaria Gas Interconnector (IGB) is 182 kilometers and it connects the gas transmission networks of Bulgaria and Greece.

The project is being implemented by the Bulgarian-Greek investment company “ICGB AD”, registered in Bulgaria in 2011, together with the shareholders of Energy Holding of Bulgaria and IGI Poseidon of Greece, each of which has a 50 percent stake.

IGB will deliver natural gas produced from Azerbaijan's “Shah Deniz-2” field to Bulgaria. For this purpose, Bulgarian state company “Bulgargaz EAD” has signed an agreement with the “Shah Daniz” consortium. The annual throughout capacity of the pipeline will be 3 billion cubic meters. In the future, this indicator can be increased to 5 billion cubic meters per year. Thus, Azerbaijan's natural gas will meet 25-30 percent of Bulgaria's demand.

The transportation of Azerbaijani gas to Europe began at the end of 2020 following the commissioning of the last segment of the Southern Gas Corridor, the TAP pipeline. Currently, Turkiye, Georgia, Greece, Bulgaria, Albania and Italy are buyers of Azerbaijani gas. As is evident, the demand for Azerbaijani gas is increasing in the face of new challenges.