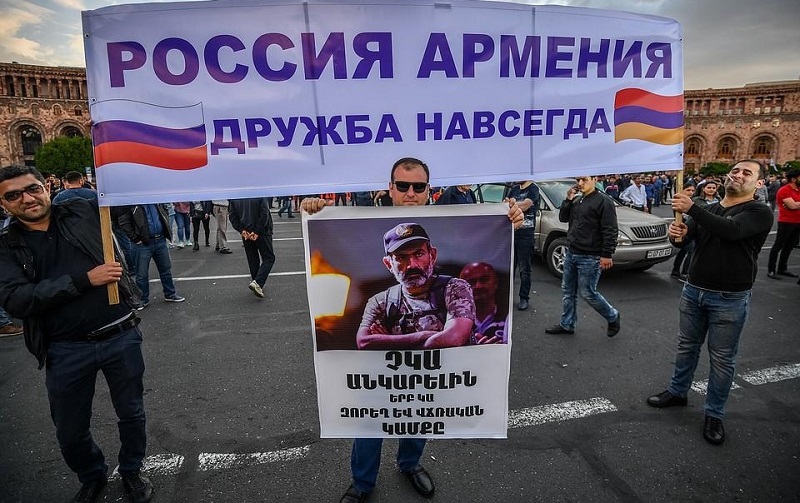 Unfortunately, there is no real progress in the post-conflict peace process between Azerbaijan and Armenia. A few days ago, Azerbaijan’s President Ilham Aliyev disclosed some details. The agreements reached on April 6 in Brussels indicate that by the end of April, Azerbaijan and Armenia were to launch working groups on border delimitation. However, Armenia at the last moment canceled the already agreed meeting for April 29. Moreover, Armenia refused to hold a meeting on the border issue on May 7-11, based on its initial proposal. Calling such behavior of Armenia ‘irresponsible’, President Ilham Aliyev said: “Even though we have certain optimism, such maneuvers and fairly strange steps of the Armenian government undermine certain confidence.”

When it comes to diplomacy, Yerevan systematically slows everything down. Armenia keeps violating its obligations under the tripartite statement of November 10, 2020. Illegal Armenian armed forces have not yet been withdrawn from the temporary deployment zone of the Russian peacekeeping contingent. The process of unblocking communications in the region is practically ‘deadlocked’. Armenia has not yet provided Azerbaijan with an “unhindered” connection between Azerbaijan and Nakhchivan (Nakhchivan Autonomous Republic). Furthermore, Armenia keeps refusing to give locations for routes along the Zangazur corridor, and the restoration of the planned railways is delayed. As for the humanitarian sphere, the situation is worse. Armenia refuses to provide information about the mass graves of Azerbaijanis, and about the fate of several thousand people who went missing during the First Karabakh War.

Indeed, Yerevan first offered to hold a meeting at the border without Russia’s participation. Then, having been obviously scolded for its arbitrariness, Yerevan proposes to hold such a meeting in Moscow.  The failure of the agreements reached in Brussels speaks volumes – Moscow was displeased from the very beginning that Pashinyan was going to Brussels for negotiations.

On the contrary, following a trilateral meeting with his Azerbaijani and Russian counterparts in Dushanbe on the sidelines of the CIS Council of Foreign Ministers, Armenia’s Foreign Minister Ararat Mirzoyan told the Russian state-run news agency TASS that a meeting of the Armenian and Azerbaijani commissions on border delimitation will allegedly take place in Moscow. However, Baku did not confirm the Armenian minister’s announcement. Baku neither confirmed nor gave consent to holding a bilateral meeting on border delimitation and border security. At the same time, a meeting, planned to be held on May 16-17 in Moscow with the participation of Russian Deputy Prime Minister Alexei Overchuk, was to focus on only communications issues. That is, the Armenian side, in a brazen manner, disseminated false information to mislead the international community, which is following the process of normalization of Armenia-Azerbaijan relations in the post-conflict period. Thus, the diplomatic tricks of Yerevan undoubtedly pursue the only goal – to disrupt the agreements with Azerbaijan by any means, precisely the ones agreed by the parties through the mediation of European Council President Charles Michel.

Now Armenia is trying to mislead the European Council. It is noteworthy to point out the main outcome of the April summit in Brussels – the parties agreed to launch talks on a comprehensive peace treaty and create a bilateral commission on border delimitation. After the Brussels meeting, Pashinyan returned to Yerevan with a package of proposals regarding the Azerbaijan-initiated five basic points, one of which envisages the delimitation and demarcation of the state border. However, no progress on this issue has been made yet.

On the other hand, Pashinyan has no other choice in the ongoing tense internal situation in Armenia. The anti-government protests that have swept through Armenia are forcing Pashinyan to blindly follow the dictates of the Kremlin. Thus, Pashinyan is striving to receive the support of Moscow to maintain his power by disrupting the EU-brokered agreements. Despite the pro-Western political course, which the Armenian prime minister tried to stick to from the very first day, his attempts to bring Armenia under the western flank were unsuccessful. Poor and unpromising Armenia turned out to be unnecessary for the electoral Old World, and this is quite a natural choice for Europe.

Brussels and Washington intend to build mutually beneficial relations with Azerbaijan, the leading country in the South Caucasus, which is capable of ensuring Europe's energy security in the long term. Suffice to point to the EU’s great interest in the Azerbaijan-initiated large-scale transport projects. Therefore, it is not surprising that Europe keeps making everything possible to ensure the security and stability of the region, forcing Armenia to block vital transport communications. All these goals meet the interests of both Europe and Azerbaijan.

For both power centers, Armenia is an unprincipled and irresponsible "player" that breaches agreements and ignores obligations. With such actions, Yerevan once again proved to be an “outpost” and a puppet of the Kremlin.

While Lithuanian President Gitanas Nausėda was welcomed with respect in Azerbaijan, he got catcalled during his visit to Armenia. Participants in the opposition march in Yerevan marched towards the residence of Armenian PM Nikol Pashinyan, where he was meeting with Lithuanian President Gitanas Nausėda. The protesters greeted the Lithuanian president’s convoy with loud shouts and hoots, a RIA Novosti correspondent reported from the scene.

On Friday, Pashinyan hosted the Lithuanian president, who arrived in Yerevan for an official visit. The participants of the opposition rally came almost close to the residence building where the meeting was taking place, at a distance of several tens of meters, and "greeted" the government motorcade with shouts, hoots, and whistles. Nausėda, accompanied by several other politicians, got out of the cars that drove up to the residence. At that moment, the protesters also loudly expressed their dissatisfaction. The Lithuanian president did not react to them in any way.

Ulviyya Zulfikar is the chief editor of News.Az