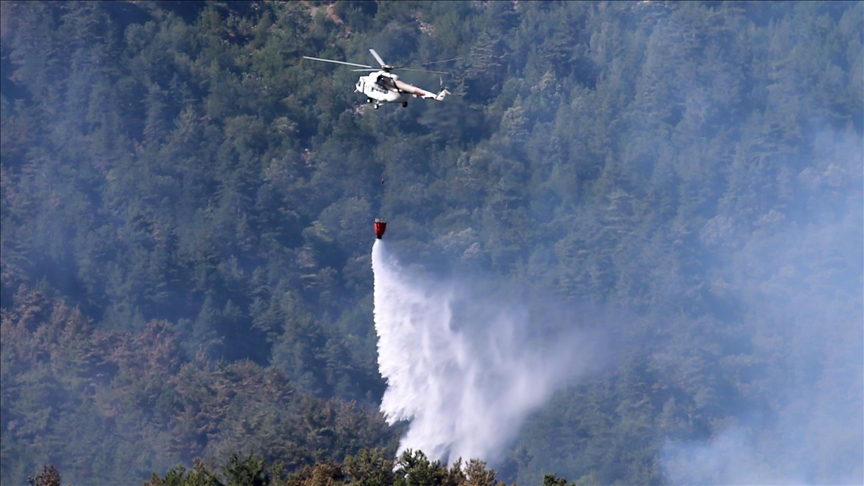 Turkey has managed to bring at least 57 of the forest fires raging across the country under control, a senior official said on Friday, Anadolu Agency reported.

Foreign Minister Mevlut Cavusoglu, Environment and Urbanization Minister Murat Kurum, and Transportation and Infrastructure Minister Adil Karaismailoglu, were also present at the press conference to share the latest developments on the forest fires burning over the past several days in various parts of the country.

Speaking on the fires in Mugla, Pakdemirli said there had been "minor damages" in the seaside Marmaris district.

"It doesn't threaten the settlements, there's a fire moving towards the sea," he said.

He also emphasized that official investigations continue into the cause of the fires.

"Judicial and law enforcement authorities continue their investigation into the cause of the fires. A statement will be made once important findings are uncovered," he said.

As a measure to ease the financial burden of victims of the flames, loan repayments for those injured will be postponed, he went on to say.

To help heal the environment after the blazes are doused, he added that new forests would be planted with the first rains to replace those that had been charred, with afforestation work to start at the end of October and beginning of November.

Efforts to extinguish the flames continue in the region along with damage assessments, Cavusoglu told reporters.

"As of tomorrow, we'll start partial payments to our citizens whose damage has been determined," said the foreign minister.

"Three of our citizens died in Antalya and one in Mugla, we wish upon them Allah's mercy," Cavusoglu added.

He underlined that the transfer of a total of 23.5 million Turkish liras (around $2.8 million) had begun from various institutions and ministries for emergency needs for the fires in Manavgat district in Antalya.

He also said that a coordination center was established within the provincial governor's office for the needs of people in all these neighborhoods.