All flights at Istanbul Airport canceled amid heavy snowfall 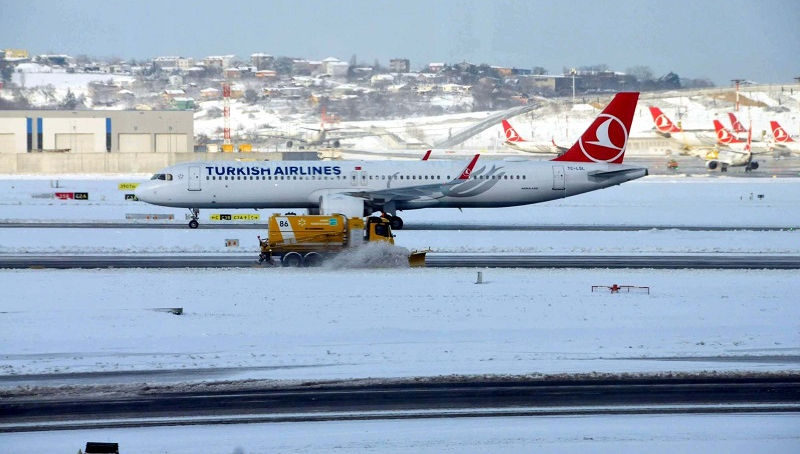 All flights to and from Istanbul Airport were temporarily halted on Monday due to heavy snowfall in the city, local media reported, while many other parts of Turkiye experienced transportation difficulties due to the bad weather, News.Az reports citing Daily Sabah.

Many parts of Turkiye have been hit with heavy snowfall since the weekend, prompting authorities to shut schools in some parts of the country. Turkiye's Disaster and Emergency Authority (AFAD) has said thousands were stranded due to the adverse weather.

National flag carrier Turkish Airlines (THY) earlier said it had canceled 36 flights in and out of Istanbul Airport and 31 at Sabiha Gökçen, the city’s second airport, scheduled for Monday, Yahya Üstün, the carrier’s vice president of media relations, said on Twitter.

Flights at Sabiha Gökçen were to be reduced by 15% on Monday due to the bad weather conditions, the airport operator HEAŞ said in a statement.

Both THY and Pegasus had canceled dozens of flights over the weekend as heavy snowfall and blizzards across Turkey caused traffic chaos and disrupted travel.

Vehicles and heavy machinery have been working to keep roads open, but authorities warned residents against all but essential travel. More snowfall is forecast for the coming days.

In a statement, AFAD said 4,603 people were stranded across the country and that emergency teams had delivered thousands of containers of food and drinks to them, adding 6,750 people were taken to dormitories in seven provinces nationwide.

Two highways connecting Istanbul to the capital Ankara were reopened on Monday, after hours of closure.

Efforts to clear the snow enabled the resumption of traffic on the D-100 highway early Monday. The Trans-European Motorway (TEM) was reopened a few hours later.