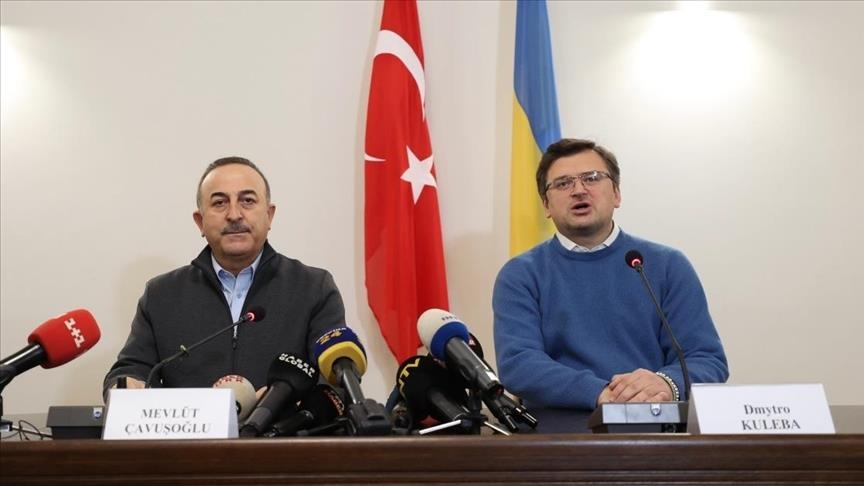 Speaking after a closed-door meeting, Turkiye’s foreign minister thanked his Ukrainian counterpart Dmytro Kuleba for having him in such "difficult days."

Cavusoglu said hopes for a cease-fire in the Russia-Ukraine war increased a bit more after visits to both Russia and Ukraine.

Saying that there is a possibility for Russian and Ukrainian leaders to meet if they agree on issues in which Ankara sees rapprochement, Cavusoglu said Ukraine offered Turkiye to be one of guarantors regarding the security dimension of a possible deal, adding that Russia has no objection.

"We held our strategic planning meeting here in Lviv on Oct. 8 (2021). We wanted to come to Lviv, especially during these difficult days, to show our support to our strategic partner Ukraine,” he said.

He stressed that thousands of civilians have died since the war began on Feb. 24, while adding that more than 3 million innocent people had to flee the country.

Cavusoglu also added that he was devastated over seeing many people waiting on the road and at border gates while on his way to Lviv via Poland.

Emphasizing that the war must end as soon as possible, Cavusoglu once again noted that the bloodshed, the tears must be stopped, while adding that Turkiye has "been intensifying efforts in this direction since the first day."

"With this thought, we brought my friend Kuleba and Russian Foreign Minister (Sergey) Lavrov together in Antalya. I would like to thank Kuleba for his constructive approach at that meeting," he said.

A high-level meeting between Lavrov and Kuleba was hosted by Cavusoglu in Antalya last week. The talks were the first high-level interaction between Russia and Ukraine since the war began on Feb. 24.