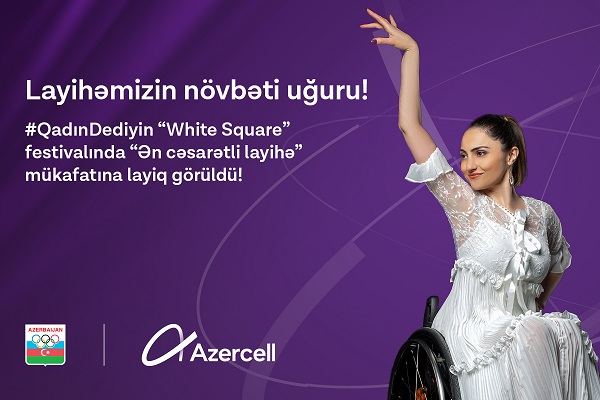 The project #QadınDediyin (#WomanShould) initiated by Azercell and gaining millions of views on social media, has won another international award. The project, which has won several prestigious international festivals so far, this time received a special award "For Bravery" at White Square, one of the largest creative festivals in Eastern Europe.

The “For Bravery” Award is presented annually to the most daring projects that highlight important issues in society. The White Square festival in Minsk was attended by more than 1,000 delegates from more than 30 countries this year. Among them, the special value attached to the video of the #QadınDediyin project confirms that the project covers an important topic in the world.

Touching on a sensitive issue such as the protection of women's rights, this project discusses the stereotypes about females in our society and the need to change this approach. The project, created as a result of cooperation between the National Olympic Committee and Azercell, was attended by successful Azerbaijani women athletes who broke these stereotypes with their life stories. By stepping towards their goals, they have proved that there are no boundaries on the path to development, education, and success.

Launched last year, the project has caused a stir on social media. Supported by authoritative influencers and bloggers, the project has reached a total of 3.8 million people, with 85% positive returns on social media. Thus, the #QadınDediyin project, which has become one of the most spirited campaigns in the history of advertising in Azerbaijan, has managed to attract attention of the both local and international communities.

It should be noted that Azercell's initiatives in the field of CSR have repeatedly won top prizes in local and international competitions. The #QadınDediyin project has previously got two major awards at the Red Jolbors Festival, one of the most prestigious competitions in marketing, advertising, and communication in Central Asia.