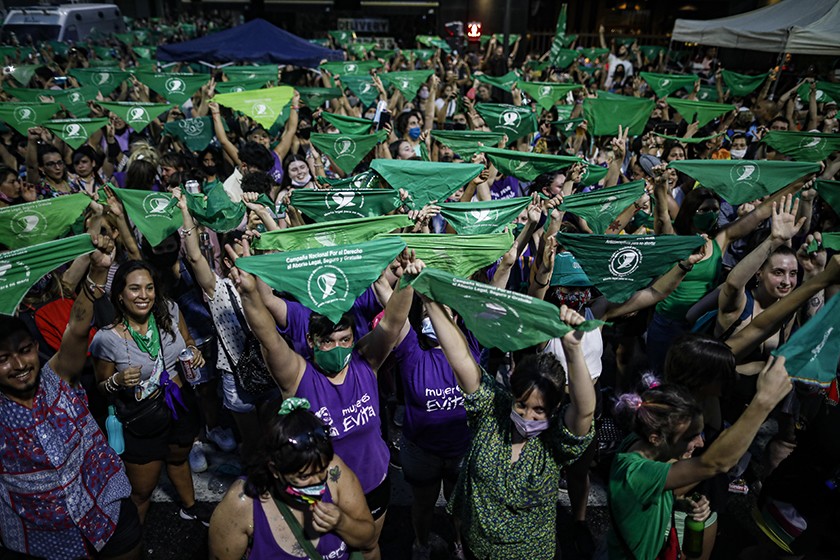 The lower house of Argentina's congress approved the legalization of abortion on Friday, sending the proposal to the Senate -- which rejected a similar bill two years ago, according to AFP.

The legislation, which would allow abortion until the 14th week of pregnancy, got 131 votes in favor and 117 against with six abstentions, reported the secretary of the Chamber of Deputies after a 20-hour session.

In Argentina, abortion is allowed only in the event of rape or danger to the mother's life, under legislation dating back to 1921.

Center-left President Alberto Fernandez presented the proposal earlier this year as a way to "guarantee that all women have access to the right to comprehensive health."

The Senate is now expected to address the bill before the end of the year.

Friday's approval was received with an outburst of joy by thousands of young people in green scarves who had spent the night outside the congress building in Buenos Aires. The scarves have become an emblem of the campaign for legal abortions.

Protesters in blue scarves, who oppose the change, were separated from the others by a fence, and greeted the result with disappointment.

The issue of legalizing abortions dominated the Argentine political agenda in 2018, when it made it to congress amid huge demonstrations in the majority-Catholic country which is the birthplace of Pope Francis.

Back then, it also got the approval of the Chamber of Deputies, but was rejected in the Senate. Both houses welcomed new members in the 2019 general elections.

"I am a Catholic but I have to legislate for everyone," President Fernandez declared Thursday. "It is a very serious public health issue."

"Abortion is legal in first-world countries and other developed countries that are very religious, such as Italy, Spain and Ireland," said health minister Gines Gonzalez Garcia.

"Now we are moving forward in Argentina. If this were a masculine problem it would have been resolved a long time ago," said the minister.

Health analysts estimate that between 370,000 and 520,000 clandestine abortions are performed annually in Argentina, according to government statistics.