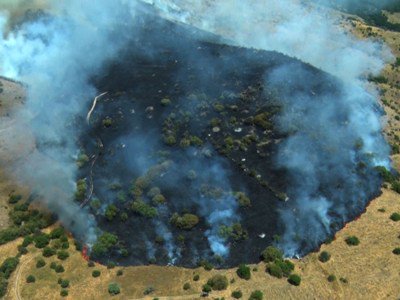 This is the fourth day that fire and rescue workers are unable to put out the fire nearby Artavan village of Armenia’s Vayots Dzor Province.

Armenian News-NEWS.am on Monday learned from the press service of the Ministry of Emergency Situations that firefighting efforts have resumed, as of 7:15am. Twelve fire and rescue workers have been dispatched to the area.

The Minister of Emergency Situations of Armenia, Davit Tonoyan, has petitioned to his Russian counterpart Vladimir Puchkov, with a request to provide a firefighting aircraft to assist in the ongoing efforts to put out the fire at Khosrov Forest State Reserve national park in Armenia.

Preparations are underway to bring such a plane to Armenia, informed the press service of the Ministry of Emergency Situations

This major fire started on August 10 at around 7pm, in the grass and forest area nearby Artavan village. Nine fire brigades and around 500 people are taking part in the firefighting efforts.

A resident of the same village was detained on suspicion of negligently causing this fire.

A criminal case has been initiated.