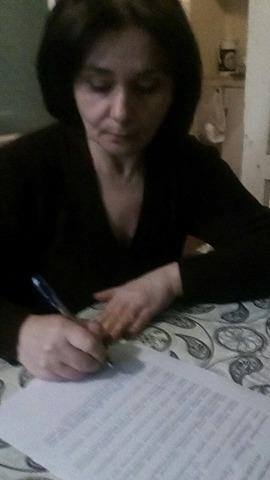 Narine Dermenjyan, a Doctor of Philosophy, linguist and author of several academic articles, who is currently living in Yerevan, has joined the Armenia-Azerbaijan Platform for Peace.

APA presents the statement made by Dermenjyan in this regard.

“I, Narine Dermenjyan, citizen of the Republic of Armenia, call to stop all military operations, and invite both parties to negotiations and end the Armenia-Azerbaijan Nagorno-Karabakh conflict that has been lasting for more than 25 years. It is high time for peace. This conflict has damaged both countries. Expressing my respect and support to sovereignty, territorial integrity and internationally recognized borders of the Republic of Armenia and the Republic of Azerbaijan, I would like to stress the importance of settlement of the conflict within international law. I want to note the importance of UN Charter, resolutions of UN Security Council and OSCE Minsk Group, aimed at resolving the conflict.

Before the conflict both nations lived in harmony on the basis of common traditions developed over centuries. I state with regret that hostile relations have been formed between nations as a result of unresolved conflict. The nations of Armenia and Azerbaijan have to stop the war for the sake of peace and prosperity of future generations. I support the idea of peaceful solution of the conflict, which has been continuing for more than 25 years as soon as possible and hope for the peace. Therefore, I express my support to the Armenia-Azerbaijan Platform for Peace, aimed at establishing and preserving peace in South Caucasus.

Given the above-mentioned reasons, I make a statement on joining the Armenia-Azerbaijan Platform for Peace.”