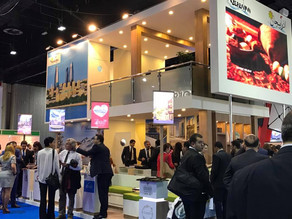 Azerbaijan embassy in UAE and general consulate in Dubai keep the issue under control.

During one of most prestigious tourism shows in the world - Arabian Trade Market held on April 24-27 in Dubai, Armenians by provocation attempted to place visual aids and maps propagating fictitious regime established in occupied territories of Azerbaijan at the Armenian stand.

Spokesman of the Ministry of Foreign Affairs (MFA) Hikmat Hajiyev told Report that Embassy of the Republic of Azerbaijan in the United Arab Emirates (UAE) and Consulate General  in Dubai disclosed this fact and immediately informed organizers of the exhibition and UAE authorities and thwarted this provocation. As a result, provocative visual aids propagating fictitious regime were removed from the stand of Armenia.

Azerbaijan embassy in UAE and general consulate in Dubai keep the issue under control.
At the above mentioned exhibition Azerbaijan is represented with a big stand arranged by the Ministry of Culture and Tourism. Numerous tourism companies of our country participate at the stand.