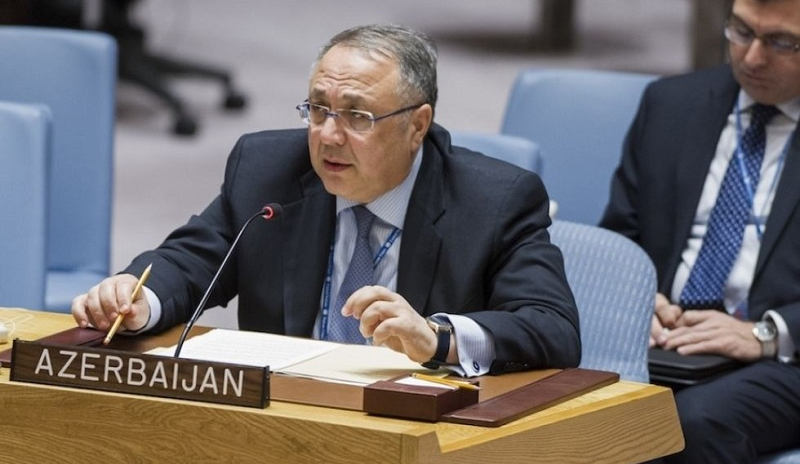 The UN Security Council (UNSC) held a debate on mine clearance issues on April 9.

Azerbaijan’s Permanent Representative to the UN Yashar Aliyev made a report on the situation in the country at the virtual debates.

The permanent representative pointed out that mines and improvised explosive devices continue to affect the daily life of many countries in conflict, thereby endangering the lives of civilians, military personnel, peacekeeping, and humanitarian personnel.

“We appreciate the UN support in strengthening the mine clearance capacity in Azerbaijan. The Mine Action Agency of the Republic of Azerbaijan, founded in 1999, with the assistance of the UN Development Program, has cleared more than 800,000 mines and unexploded ordnance over the past 20 years," Aliyev said.

The permanent representative reminded that Armenia in late 1991 - early 1992 unleashed a full-scale war against Azerbaijan, as a result of which a significant part of the Azerbaijani territories was occupied. The war claimed the lives of tens of thousands of people, cities, towns, and villages were destroyed.

“As a result of the counter-offensive operation successfully carried out by the Armed Forces of Azerbaijan in response to another act of aggression committed by Armenia on September 27, 2020, about 10,000 square kilometers of Azerbaijani territory with more than 300 cities, towns, and villages were liberated from Armenian occupation,” Aliyev said.

“The Trilateral Declaration signed on November 10, 2020, by the presidents of Azerbaijan and Russia and the prime minister of Armenia put an end to 30 years of armed conflict between Armenia and Azerbaijan and set agreed parameters for lasting peace in the region. On January 11, 2021, the heads of the three countries signed another joint statement aimed at implementing a number of practical steps to remove obstacles to economic and transport links in the region,” he noted.

“However, since the signing of the declaration of November 10, 2020, 20 Azerbaijani citizens, including 14 civilians, have died, and 87, including 16 civilians, have been seriously injured following mine explosions in the liberated lands. Throughout the conflict, most of the previously occupied lands of Azerbaijan, including cemeteries, historical sites, and other civilian objects, were consistently mined by Armenia. Armenia refuses to provide information on mined areas in the liberated lands, thereby deliberately endangering human lives and trying to impede post-conflict restoration, reconstruction, and humanitarian efforts in these lands, as well as the safe return of internally displaced persons to their homes,” the diplomat added.

The permanent representative stressed that Armenia's actions constitute a clear violation of international law and demonstrate its unwillingness to fulfill its international obligations and refrain from the policy of confrontation.