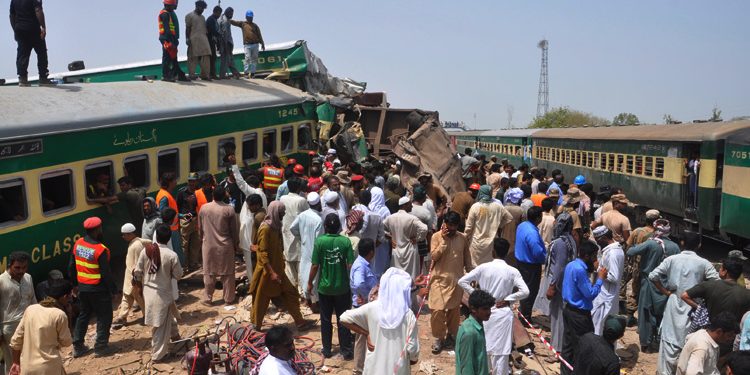 At least 40 people were killed and 60 others injured early Monday in a collision between two passenger trains in southern Pakistan, officials and local media reported.

The collision between the northbound and southbound trains occurred near the Ghotki district in southern Sindh province, located 526 kilometers (326 miles) from the provincial capital Karachi.

Deputy Commissioner Ghotki Usman Abdullah told reporters that the accident occurred after rear carriages of the northbound Millat Express derailed and drifted to the parallel track, resulting in a collision with the southbound Sir Syed Express.

Footage aired on local broadcaster Geo News showed rescue workers and locals pulling bodies and the injured out and loading them into ambulances. The badly damaged train cars were seen lying on the track.

An investigation has been ordered into the accident.

Abdullah said that at least 40 bodies have been recovered and 60 injured people were rushed to hospitals, where 25 are reportedly in critical condition.

According to the National Disaster Management Authority, a state-run body that coordinates between different relief and rescue agencies, at least six more bodies are trapped under the rubble.

"2 helicopters are being flown from Multan for casualties evacuation and speedy relief measures," the Pakistani army said in a statement.

President Arif Alvi and Prime Minister Imran Khan expressed their grief over the tragic accident and offered condolences to the families of the victims and prayers for the speedy recovery of the injured.

Pakistan has had a long history of train accidents, mainly because of poor infrastructure and a lack of safety standards.

On Oct. 31, 2019, more than 70 people died in an explosion on a moving train near Rahimyar Khan district of northeastern Punjab province which officials later blamed on a fire caused by a short-circuit.

At least 19 members of a small Sikh community died in a collision between a bus and a train in Punjab's Sheikhupura district in July last year.