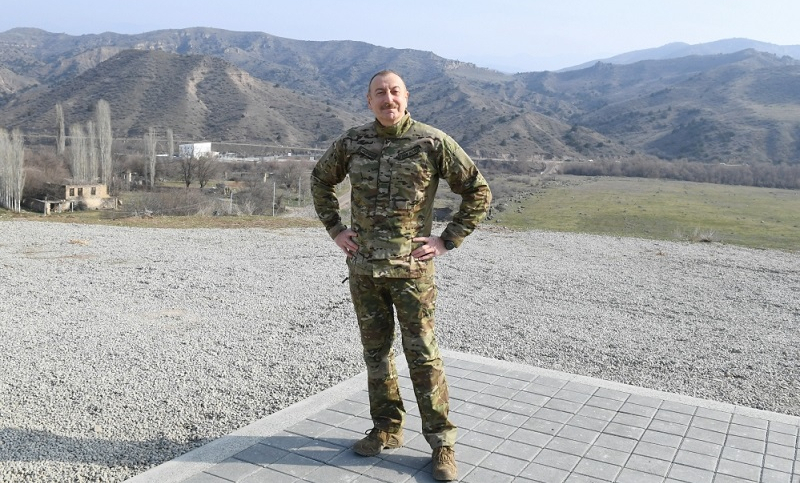 There are major plans, and Azerbaijan has already launched the restoration work in its liberated lands, President Ilham Aliyev said as he addressed in Gulabird village, Lachin district during his next trip to the liberated territories.

“We will try to complete mine clearance as soon as possible and assess the damage caused. In parallel with this, infrastructure projects have already started,” the head of state noted.

President Aliyev emphasized the importance of the Horadiz-Zangilan-Aghband railway, the construction of which has been launched on February 14.

“The foundation of the Horadiz-Zangilan-Aghband railway was laid in Horadiz today. This railway is of great strategic importance. First of all, because it will be of great importance both for the travel of citizens to the liberated lands and for cargo transportation. On the other hand, this railway will extend to Nakhchivan. The joint statement signed on 10 November contains a special provision on the creation of the Nakhchivan corridor. This work has already started. I am sure that this project, being carried out on our initiative, will be implemented. After a long break, Azerbaijan and its integral part of the Nakhchivan Autonomous Republic will be connected with each other by rail, and thus our strategic, economic and political goals will be met,” he added.

The head of state stressed that this railway infrastructure will extend to Turkey, thus creating a second railway network connecting Azerbaijan and Turkey.

“Three and a half years ago, we put into operation the Baku-Tbilisi-Kars railway. This was also a historic achievement. We connected Azerbaijan and Turkey by rail for the first time in history. And now a second railway will be built and all countries of the region will be able to take advantage of it. They are very interested in the construction of this railway as well. It is possible to say that countries of our region have a positive assessment of this project,” the president concluded.