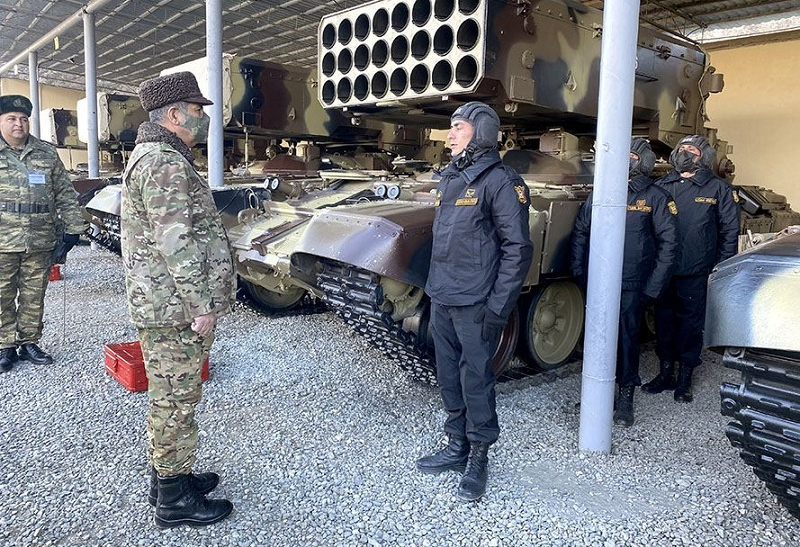 Under the instruction of Azerbaijani President, Supreme Commander-in-Chief of the Armed Forces Ilham Aliyev, activities on increasing combat readiness and improving the social and living conditions of servicemen serving in the liberated territories continue, the Defense Ministry told News.Az.

On February 9, Defense Minnister, Colonel General Zakir Hasanov, and the leadership of the Ministry got acquainted with the conditions created in the new military unit commissioned in the liberated territories.

It was reported that all facilities in the military unit have been overhauled in accordance with modern requirements and provided with the necessary equipment and inventory. There is a headquarters building, barrack, ideological room, classroom, office premise, amenity and weapon room, bath and sanitary facility, canteen, and medical point, which are equipped with a heating system.

Moreover, a sports area was built for the effective organization of servicemen’s leisure time. Landscaping work was carried out in the unit’s area and various types of trees were planted. The area is provided with uninterrupted electricity.

Bringing to the attention of the servicemen that they have to maintain a high level of combat readiness, as well as be ready for the new tasks given by the Supreme Commander-in-Chief of the Armed Forces any moment, the defense minister noted that modern weapons, military vehicles, and equipment will further be purchased as part of reforms carried out in the army.

Minister Hasanov Hasanov also spoke about the achievements gained in the development of the Azerbaijan Army and the increase in the military power of Azerbaijan as a result of care and attention paid by the President of the Republic of Azerbaijan Mr. Ilham Aliyev.

In the end, the defense minister gave relevant instructions to the command on further improving the social and living conditions, as well as maintaining a high level of combat readiness of the servicemen.