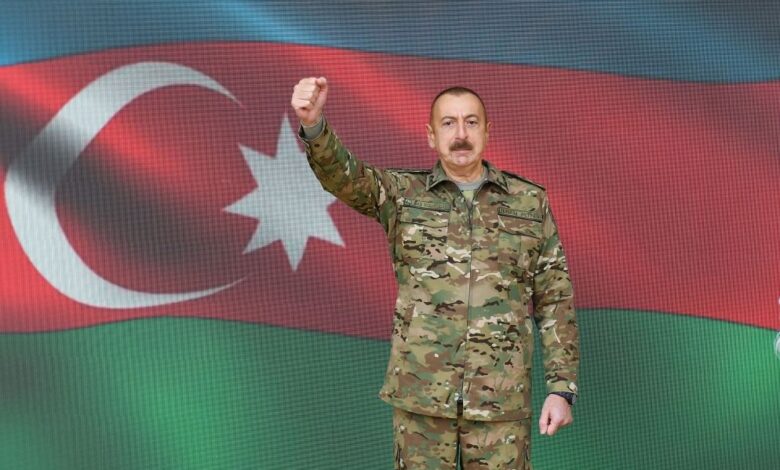 News.Az presents the article by Esmira Jafarova, a Board Member of the Baku-based Center of Analysis of International Relations (AIR Center).

January 12, 2022, witnessed another comprehensive and agenda-setting interview by the President of Azerbaijan, Mr. Ilham Aliyev, which he this time gave to local new agencies. President Aliyev’s interviews with both local and foreign media offer, every time, important insights on issues of foreign and domestic policy, especially in light of the post-44-day Karabakh war realities and the new regional architecture.

While a wide array of issues, including post-conflict rehabilitation in Karabakh, relations with Armenia, Azerbaijan’s foreign policy priorities and interactions with its partners, as well as issues relating to domestic policy, for example, the economy, energy, food security, etc., were addressed, in this op-ed I want to encapsulate the President’s assessment of the new realities that Azerbaijan has created in the region after the 44 day Karabakh war.

In his usual open and candid way, President Ilham Aliyev emphasized that the reaction of the international community to the post-44-day Karabakh war realities is satisfactory, and this is, of course, a result of Azerbaijan’s strenuous work in this direction. For instance, having reflected on the preliminary reactions of the OSCE Minsk Group to the war and its aftermath, the President descried them as then being out of touch with reality.

However, with the passage of time and due to Azerbaijan’s principled position, a shift in Minsk Group’s approach to the new regional realities is now becoming apparent: references to the November 10 Agreement and other post-war documents are already prevalent in their recent statements. “This means that they came to accept new realties. And Azerbaijan is not a country whose interests could be ignored,” observed President Ilham Aliyev in the interview. However, he added that this in no way means Azerbaijan is exhibiting hubris because of its achievements; rather, it means Azerbaijan is owning its success, which was achieved through hard work and within its constitutional rights, the UN Charter, and the Helsinki Final Act. As a result, the new realities that Azerbaijan has created are already being accepted by its international partners, including by international organizations such as the UN, the Non-Aligned Movement, the OSCE, the European Union, and the CIS.

Moreover, President Ilham Aliyev also noted that he has witnessed increased support for Azerbaijan’s just cause in his interactions with the heads of different international structures, as well as heads of state and governments. Although this all happened after Azerbaijan won the 44 day war and created new realities on the ground, many also acknowledge that they have always supported Azerbaijan’s fight to restore its territorial integrity. Azerbaijan’s confident victory made an open declaration of such support easier—and necessary.

In this light, the President also reflected on the future role of the OSCE Minsk Group, which mediated the conflict for nearly three decades, however, to no avail. He noted that the Minsk Group should fully accept the new, post-war realities created by Azerbaijan, and the fact that the former Armenia–Azerbaijan conflict is the thing of the past. Azerbaijan solved the conflict, while the Minsk Group demonstrably failed to do so. Although there are reports testifying to the lack of unanimity within the Minsk Group itself when it comes to the past conflict and the current situation, this situation in no way bothers Azerbaijan anymore. The President made it abundantly clear that the Minsk Group should therefore be aware of the fact that they cannot deal with a nonexistent “conflict” anymore and should try to shape a new agenda for themselves that will not involve an “Armenia–Azerbaijan conflict.”

Speaking of Azerbaijan’s increasingly strengthening regional and international standing, which is fully in line with Azerbaijan’s posture as an emerging middle power, President Aliyev highlighted Azerbaijan’s regional initiatives in energy, transport, and humanitarian issues, as well as its role as a norm entrepreneur in promoting the values of multiculturalism, tolerance, cooperation, sustainable development, and growth. As proposed by the author of these lines back in 2020, by acting as a norm enterpreneur and assuming responsibility for the issues of global importance, Azerbaijan is no longer a small state, but a middle power in its own right. And as a Chair of the Non-Aligned Movement (NAM), Azerbaijan acquired a greater opportunity to promote its global initiatives and further capitalize on its status as a middle power,

NAM has rekindled its value and importance to world politics under the Azerbaijani chairmanship (2019–2023) thanks to the country’s overtures for fighting vaccine nationalism and the unequal distribution of vaccines, as well as its readiness to help those in need, having extended financial and other assistance to over 80 countries during the pandemic. The NAM, under Azerbaijani chairmanship, has truly turned into a champion of the values of equity and vaccine accessibility when it comes to dealing with the scourge of COVID-19.

It was also this conviction that made possible the convening of the 31st special UN General Assembly session dedicated to COVID-19 at the initiative of Azerbaijani President, backed by the NAM. Not only has Azerbaijan created new realities in the South Caucasus after having won the 44-day war, but it is also assertively consolidating its increasingly solid international standing by backing the merits of effective multilateralism and cooperation instead of copying the disheartening example of the selfishly isolationist and self-serving foreign policies of some other actors.

In his recent interview, President Ilham Aliyev was vividly clear in the messages he sent about the two issues covered by this op-ed. Azerbaijan is the mastermind of the current new realities in the South Caucasus region; and, slowly but surely, and as expected, these realities are gaining wide international traction. This whole regional transformation, with Azerbaijan at its core, further buttresses the country’s already elevated global stance that strikes down an old definition that portrayed this South Caucasus republic as a “small, post-Soviet state” and welcomes a new and thriving Azerbaijan as a middle power.