Azerbaijan delivers another statement of NAM at UNESCO 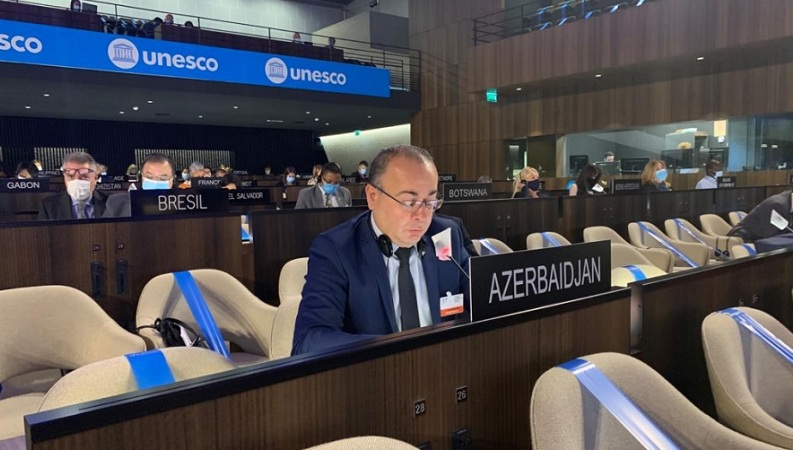 “At the 18th Summit of the NAM, held in Baku, Azerbaijan, on 25-26 October 2019, the NAM Member States reaffirmed their commitment to the 2003 Convention, as an important contribution of the international community in favor of the protection of the intangible cultural heritage, to ensure the validity of the cultural manifestations of States, capable of being transmitted from one generation to another, and as an instrument for peace, tolerance, coexistence, respect for human rights and the promotion of the identity and cultural diversity of the peoples,” said Chargé d'affaires of the Permanent Delegation of Azerbaijan to UNESCO Ayaz Gojayev as he delivered a statement on behalf of the Non-Aligned Movement at the 8th session of the General Assembly of the States Parties to the 2003 Convention for the Safeguarding of the Intangible Cultural Heritage at UNESCO headquarters in Paris.

“NAM would like to express its deep appreciation with the work of the Secretariat of the 2003 Convention and commend for its tireless efforts in advancing the implementation of the Convention, which resulted in its high ratification by countries, including many member states of NAM,” the statement says.

Ayaz Gojayev said: “We appreciate the efforts of the Secretariat of the Convention and the UNESCO Culture Sector in providing the timely response to the COVID-19 pandemic by highlighting the contribution of intangible cultural heritage to the well-being of communities, facing the challenges of the health crisis, lock-down and economic stagnation related to the pandemic. We believe that intangible heritage can be an extremely valuable resource to support the recovery of people and further promote the achievement of sustainable development goals.”

“We believe that the current challenges that the world faces highlight more and more the need to double the efforts to operationalize the responses from UNESCO to the safeguarding of intangible cultural heritage in contexts of emergencies, including armed conflicts, situations of displacement and natural disasters. In this regard, we commend the Secretariat for its work on developing the dedicated guidelines and operational modalities that will be discussed at this General Assembly,” he noted.