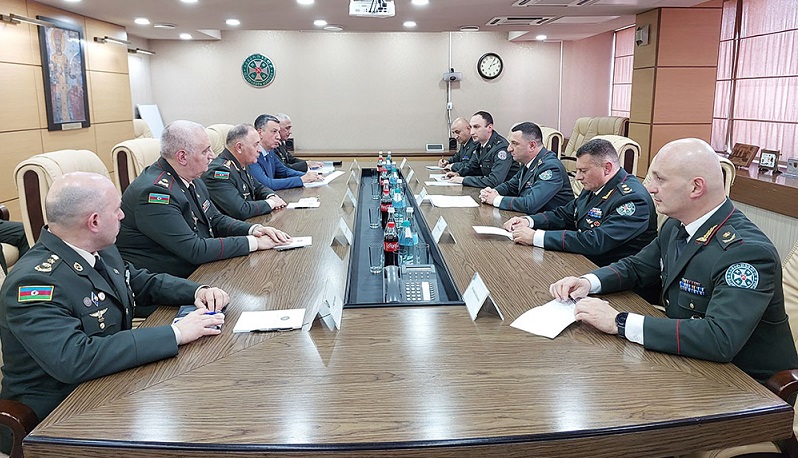 Azerbaijan’s First Deputy Minister of Defense, Chief of General Staff, Colonel General Karim Valiyev on Wednesday visited the Command of the Georgian Defense Forces as part of his official visit to this country.

First, an official welcoming ceremony was held for the Chief of the Azerbaijani General Staff, the country’s Defense Ministry told News.Az.

The meeting, held in a working environment, discussed issues of ensuring peace and security in the region, as well as the current state, and prospects for the development of military cooperation between the two countries. The sides exchanged views on ensuring the security of regional economic projects and further expanding cooperation in military-technical, military-educational, military-medical, and other spheres. The participation and continuation of the training of the Azerbaijan Army’s servicemen in the courses organized at the Sachkhere Mountain Training School were positively assessed.

It was stressed that joint exercises, conferences, and training are held on a regular basis between the armies of Azerbaijan and Georgia, and the significance of holding these events in the bilateral format and Azerbaijan-Georgia-Türkiye trilateral format, as well as within the framework of NATO, was emphasized.

The meeting discussed the preparations for the “Caucasian Eagle-2022” Special Forces Joint Exercises to be held in October this year with the participation of the Azerbaijani, Turkish and Georgian servicemen, as well as the high-level organization of the “Eternity-2023” computer-assisted Command and Staff Exercises and the “Caucasian Eagle-2023” Joint Exercises, which are planned to be conducted during the next year. It was noted that joint military exercises create wide opportunities for improving interoperability between our armies and increasing the level of combat readiness, as well as for the exchange of experience.

The parties noted mutual support for the territorial integrity, independence, and sovereignty of both states, and emphasized that the Azerbaijani-Georgian relations, which reached the level of strategic partnership, create favorable conditions for the further development of military cooperation that meets the interests of the military structures.

At the meeting, it was noted that the Azerbaijani-Georgian military cooperation is aimed at ensuring stability and security in the region.