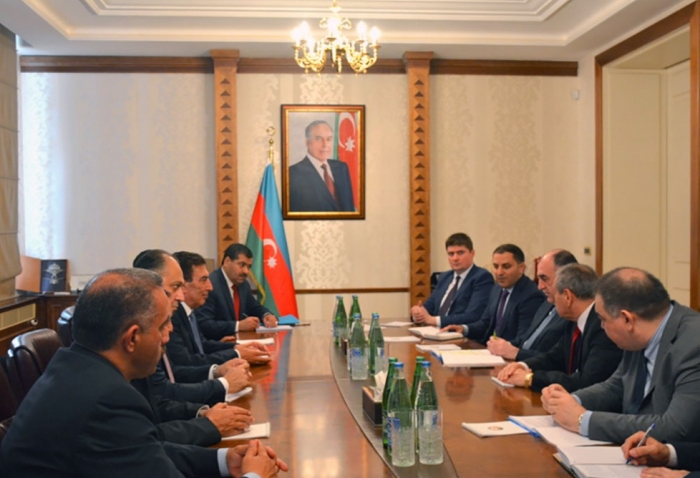 The sides hailed the development of cooperation between Azerbaijan and Jordan in various areas.

Azerbaijan`s Minister of Foreign Affairs Elmar Mammadyarov has today met with a delegation led by Speaker of the House of Representatives of the parliament of Jordan Atef Yousef Saleh Al-Tarawneh, according to AzVision.

The sides hailed the development of cooperation between Azerbaijan and Jordan in various areas.

Minister Elmar Mammadyarov talked about the crucial role of high level visits in the development of relations and noted that the visit of President of the Republic of Azerbaijan Ilham Aliyev to Jordan and the King Abdullah II of Jordan to Azerbaijan defined new range of opportunities in further deepening and enhancing of bilateral relations.

Furthermore, Elmar Mammadyarov said that the current development of political relations would serve to the advancement of bilateral economic relations and in this regard mentioned the importance of Inter-Governmental Commission on trade, economy and technical cooperation.

FM Mammadyarov briefed the Jordanian delegation about the current status of negotiation process on the Armenia-Azerbaijan Nagorno-Karabakh conflict and stressed that the conflict must be solved based on the territorial integrity and sovereignty of Azerbaijan within the internationally recognized borders and immediate, complete and unconditional withdrawal of the armed forces of Armenia from all occupied territories of Azerbaijan has to be ensured as demanded by the relevant resolution of the UN Security Council. He also noted that the fair stance by Jordan on the conflict is highly appreciated.

Minister Mammadyarov talked about the role of parliamentary diplomacy in strengthening inter-state, as well as people-to-people contacts. He also emphasized the importance of adoption of statement by Jordanian Senate in 2013 on Khojaly Genocide.

Atef Yousef Saleh al-Tarawneh mentioned that the relations between Azerbaijan and Jordan are based on brotherhood and friendship and noted the significance of reciprocal visits in advancing the relations. He also talked about the wide range of prospects in development of cooperation in the field of tourism, investment and the other spheres.

He said that Azerbaijan is known for its firm stance in fighting against global terrorism and highly appreciated praiseworthy efforts of Azerbaijan for promoting and presenting true values of Islam in the entire World.

The sides also exchanged views on global and regional issues of interest.