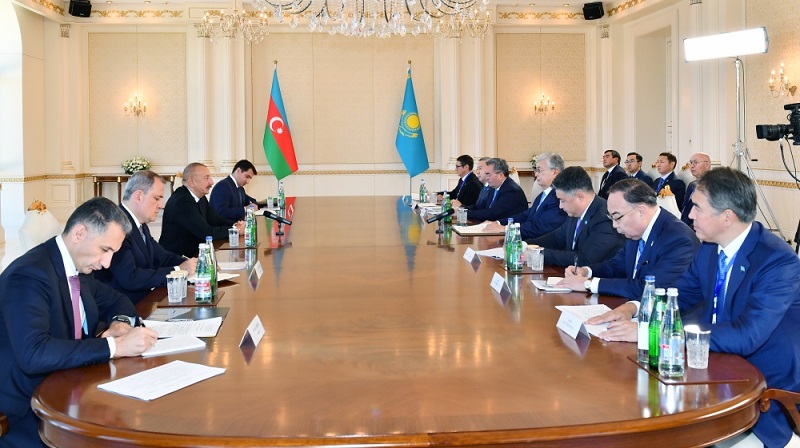 The Middle Corridor has great prospects and, of course, Kazakhstan and Azerbaijan have a very important role in the implementation of this project, Azerbaijani President Ilham Aliyev said as he addressed an expanded meeting with his Kazakh counterpart Kassym-Jomart Tokayev in Baku on Wednesday, News.Az reports.

The head of state noted that the bilateral agenda between the two countries is quite broad. “In the lead-up to your visit, relevant agencies worked thoroughly on many issues. We are about to sign more than 20 documents. Some of them will be signed with our participation and will significantly help to strengthen mutual activity,” he said.

The Azerbaijani leader stressed that there are great plans for the development of transport and logistical infrastructure.

“Timely measures have been taken both in Kazakhstan and Azerbaijan to create this infrastructure. Now there is talk about linking the cargo flow between our countries and increasing its volume, thereby increasing the transit potential of our countries,” the head of state noted.

Relevant bodies have been actively cooperating in this direction for some time now, said President Aliyev, adding. “In my opinion, the Middle Corridor has great prospects and, of course, Kazakhstan and Azerbaijan have a very important role in the implementation of this project.”