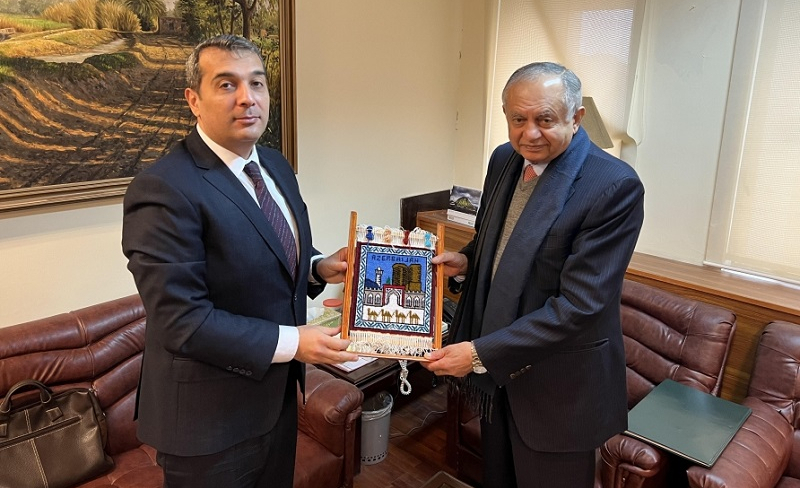 Azerbaijani Ambassador to Pakistan Khazar Farhadov has met with Adviser to the Pakistani Prime Minister for Commerce and Investment Abdul Razak Dawood.

Khazar Farhadov hailed the role of both countries` leadership in developing Azerbaijan-Pakistan relations. Touching upon the necessity of further strengthening economic ties between the two countries, Farhadov stressed the importance of the Azerbaijan-Pakistan Joint Intergovernmental Cooperation Commission, as well as the establishment of the working groups in the fields of energy, transport, tourism, education, health and information technologies.

The ambassador noted that Azerbaijan is located at the crossroads of East-West, North-South transport and communication corridors, and highlighted a number of international projects implemented by the country, as well as the potential of the Alat Free Economic Zone.

Abdul Razak Dawood spoke about the sincere relations between the two countries and stressed the significance of strengthening economic ties. He hailed the economic potential of both countries, and expressed his intention to visit Baku with a Pakistani delegation as soon as possible.

Noting the importance of negotiations between the two countries` authorities on a legal framework that will make a special contribution to strengthening the trade relations, Abdul Razak Dawood expressed his confidence that efforts will be stepped up to strengthen Azerbaijan-Pakistan economic ties.

The sides also exchanged views on the importance of the Azerbaijan-Pakistan-Turkey trilateral cooperation format.