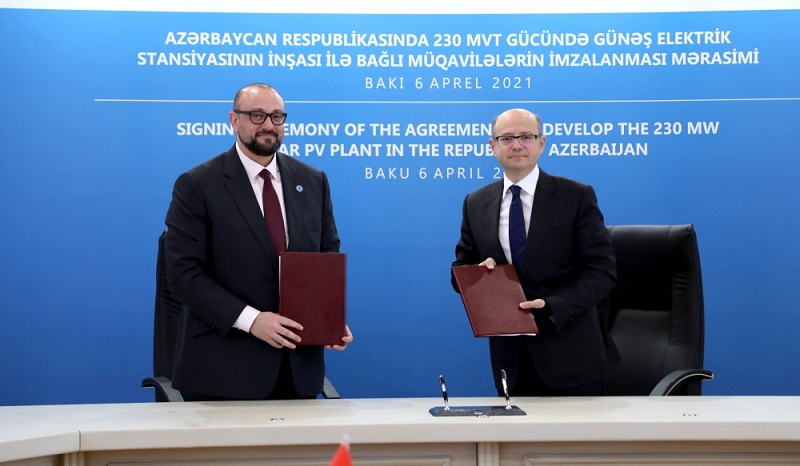 Minister of Energy Parviz Shahbazov appreciated this project based on foreign investment in terms of addressing the global challenges, sustainable and diversified development of the country's economy, as well as the objectives of the reforms in the energy sector. “The transformation of Azerbaijan into a country of “green growth” through the extensive use of renewable energy sources over the next 10 years has been defined by President Ilham Aliyev as one of the national priorities that will ensure socio-economic development. By signing these contracts for a solar power plant worth about 200 million USD, we are one step closer to our goals for the renewable energy and carbon emissions. The solar power plant to be built in Baku and Absheron district will produce about 500 million kWh of electricity annually, save 110 million cubic meters of natural gas, reduce carbon emissions by 200,000 tons, create new jobs and attract other investors to new projects.“

On behalf of the United Arab Emirates and Masdar, Minister of Energy and Infrastructure Suhail Al Mazrouei thanked the President of the Republic of Azerbaijan for the opportunity to participate in the implementation of strategy on the development of renewable energy and the reduction of greenhouse gas emissions by 35% in Azerbaijan. "Through the competition and fair processes that led to the signing of these important documents between Azerbaijan and Masdar, the latest technologies and reasonable prices have been attracted. We look forward to continue our commitment to Azerbaijan by building more projects in the future."

Speaking at the event, President of Azerenergy OJSC Baba Rzayev underlined the importance of wind and solar energy pilot projects in the course of diversifying the energy production of Azerbaijan, which has become an exporter of electricity along with ensuring its energy security, through renewable energy sources. “According to the signed agreements, the connection of the 230 MW power plant to be built by the company to the network and the purchase of electricity generated at the plant will be performed by Azerenergy OJSC. The power plant will be integrated into the energy system by connecting to the "Janub" substation. Together we will achieve timely and high-level implementation of these agreements.” 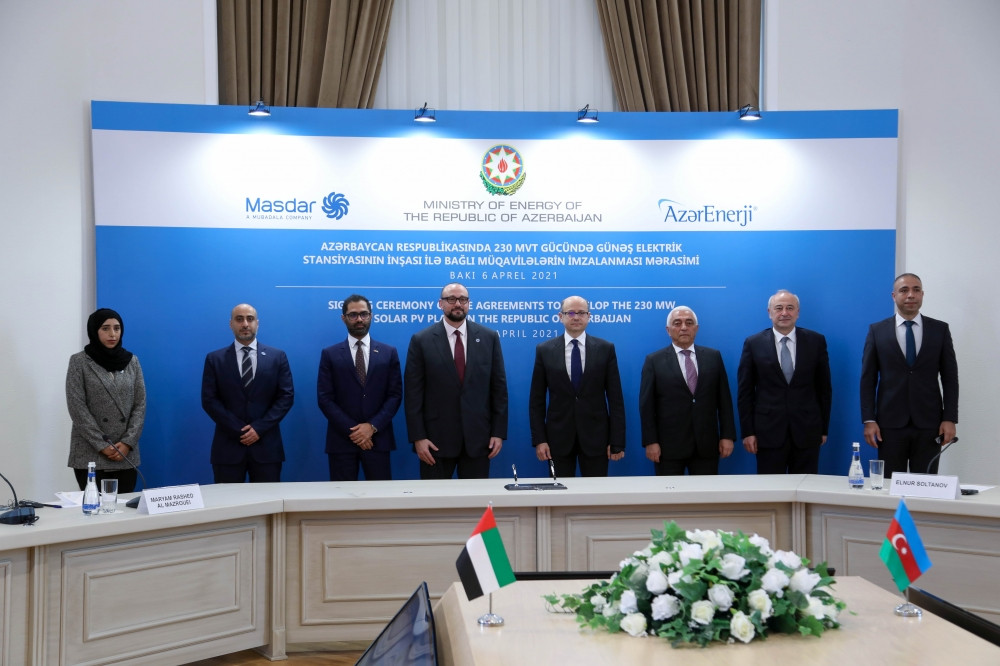 Stressing Azerbaijan`s bold renewable energy journey and contributions to the fight against climate change in the world through such projects, Chief Executive Officer of Masdar Mohamed Jameel Al Ramahi expressed Masdar`s full support for this project, which will be useful to all stakeholders. "As Masdar, we are proud of being part of Azerbaijan’s first foreign investment-based solar project that is structured as a public-private partnership and being strategic partner on the path to cleaner and more sustainable electricity generation. Together, we will deliver an outstanding project, an icon of engineering that will create jobs and deliver lasting improvements to the country’s infrastructure and will be admired by the whole region."

It should be reminded that in compliance with the Order of the President of the Republic of Azerbaijan No. 1209 dated 29 May 2019 on the "Acceleration of reforms in the energy sector" approximately 10 international energy companies, including Masdar have been cooperated with in order to develop the renewable energy sector, the proposals of companies on investment projects have been thoroughly analyzed and the selection process was carried out in three stages in an environment of high competition and transparency. In accordance with the results of the selection process, implementation agreements on the pilot projects in renewable energy field were signed with “ACWA Power” of the Kingdom of Saudi Arabia and “Masdar” of the United Arab Emirates on 9 January 2020. The implementation of issues related to the construction of 230 MW solar power plant under the implementation agreement is also provided in a coordinated manner within the framework of the activities of the Commission established by the Order of the President of the Republic of Azerbaijan No. 1673 dated 5 December 2019 on the "Implementation of pilot projects in the field of use of renewable energy sources".