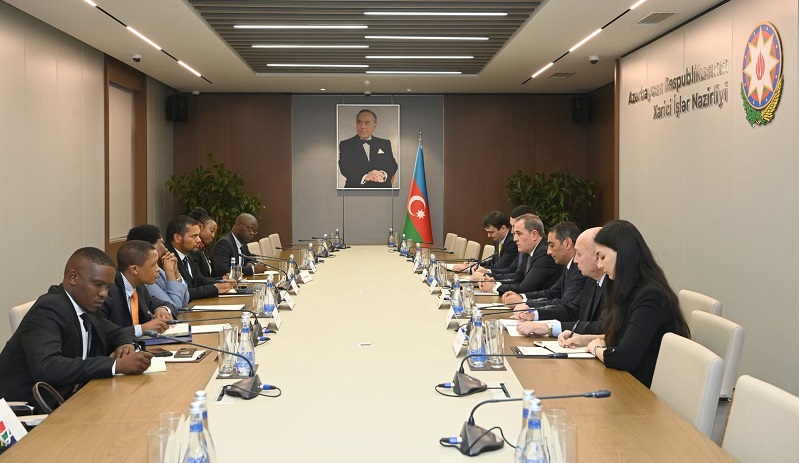 During the meeting the sides exchanged views on issues on the bilateral and multilateral cooperation agenda, the regional and global developments, as well as cooperation in combating modern challenges.

Bayramov hailed the cooperation between the two countries, including in the political, economic and humanitarian fields, despite the fact that Azerbaijan and South Africa are located in regions remote from each other and stressed the importance of efforts for further development of relations. Along with bilateral relations, the importance of strengthening cooperation within the framework of international organizations, in particular, the UN and Non-Aligned Movement (NAM), was emphasized.

He also expressed gratitude for the constant support of the initiatives put forward by Azerbaijan within the framework of the NAM. Bayramov provided information about the new reality that emerged in the region after Azerbaijan secured its territorial integrity, about Azerbaijan's peacekeeping efforts, as well as the restoration and construction work carried out in the liberated territories.

Deputy Minister of South Africa Alvin Botes spoke in detail about political consultations, conducted on October 24, 2022, in Azerbaijan's Baku between the ministries of the two countries. He noted that Azerbaijan as a chairman of NAM is working during this difficult period to increase the role of the movement. Botes expressed gratitude for the assistance provided to developing countries, including states located on the African continent, in particular during the pandemic.

Botes said that South Africa attaches great importance to the further development of cooperation with Azerbaijan. In particular, the importance of strengthening the legal framework for the development of economic ties was emphasized. He stressed the importance of joint activities, including South-South cooperation, to improve the effectiveness of international organizations in combating existing challenges and threats.

During the meeting, other issues of mutual interest were also discussed.