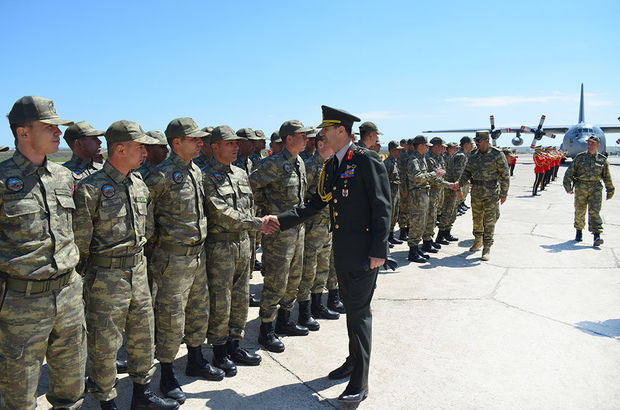 The Armed Forces of Azerbaijan and Turkey will hold live-fire joint tactical exercises on May 1-5, APA reports.

The exercises will be conducted in accordance with the agreement on military cooperation between Azerbaijan and Turkey, Azerbaijan’s Defense Ministry said on Friday.

A solemn ceremony was held at an air base to welcome the personnel of the Turkish Armed Forces that will take part in the drills.

After the military band performed the national anthems of the two countries, the Turkish soldiers went to the military unit, where they will be accommodated during the exercises.

Emphasizing the importance of joint exercises, the head of the Turkish delegation, Colonel Hakan Acikgoz, noted that the combat experience gained in the exercises will be reflected on the further operational plans of both countries.

The main aim of the exercises is to improve coordination through the exchange of experience between the armed forces of Azerbaijan and Turkey, as well as to achieve the interoperability of the military units of the two countries through joint headquarters planning, improving the readiness and capabilities of the units to conduct operations.

The joint drills will involve armored vehicles, artillery systems and mortars, military and transport helicopters of the Air Force, as well as air defense units and anti-aircraft missile units equipped with modern defensive systems to protect groupings from the air.

During the preparatory period, a number of cultural events for the Turkish military personnel are due to take place.