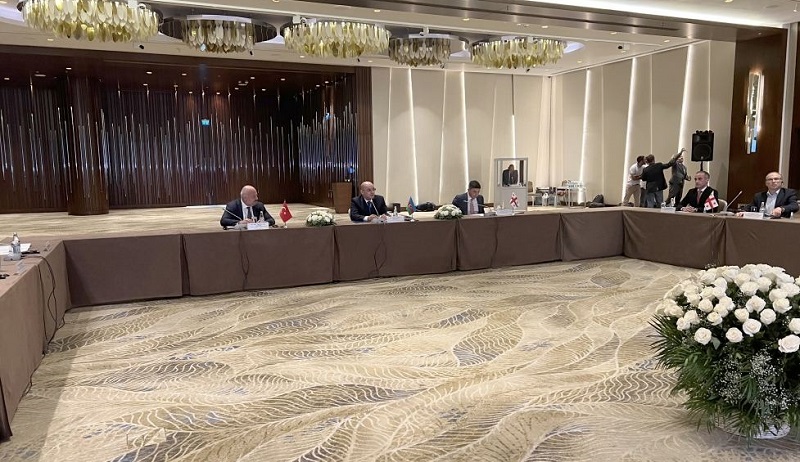 A meeting of a Trilateral Committee on Customs Issues between the governments of Azerbaijan, Türkiye and Georgia was held in Baku on Thursday, News.Az reports.

At the meeting, the parties signed an agreement on the exchange of primary information to simplify transit customs procedures within the framework of the Baku-Tbilisi-Kars railway project.

Before the meeting, both delegations paid tribute to the memory of the great leader Heydar Aliyev in the Alley of Honor, laid wreaths at his grave, and also honored the memory of the outstanding ophthalmologist, academician Zarifa Aliyeva, laid flowers at her grave.

The guests honored the memory of the martyrs in the Alley of Martyrs and laid wreaths at the 'Eternal Flame' monument.

Then, the parties discussed cooperation in the customs area and issues of mutual interest in a bilateral format.

The heads of delegations who spoke at the meeting stressed the importance of cooperation in customs matters for easy and rapid implementation of regional and international trade and noted that the agreement would make an important contribution to the more effective establishment of activities on this issue.

The agreement was signed by First Deputy Chairman of the State Customs Committee of the Republic of Azerbaijan Lieutenant-General Shahin Bagirov, Deputy Trade Minister of Türkiye Riza Tuna Turagay and Director General of the Revenue Service of Georgia Levan Kakava.

The purpose of the agreement is to implement the electronic exchange of primary information to simplify customs procedures for goods transported in transit within the framework of the Baku-Tbilisi-Kars railway project through the territory of all three countries.

The agreement will create important opportunities in terms of timely and efficient transportation of goods by the Baku-Tbilisi-Kars railway connecting the trans-European and trans-Asian railway corridors.