Azerbaijani accepts credentials of incoming ambassador of Bosnia and Herzegovina 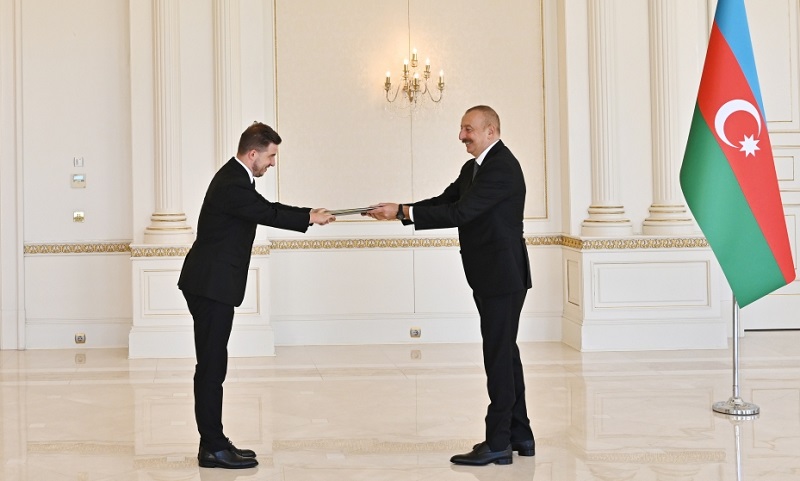 President of the Republic of Azerbaijan Ilham Aliyev has received credentials of the newly appointed Ambassador Extraordinary and Plenipotentiary of Bosnia and Herzegovina Adis Alagic.

Ambassador Adis Alagic presented his credentials to the head of state.

The head of state hailed the fact that Bosnia and Herzegovina stands by Azerbaijan during the occupation of the country`s lands by Armenia and after the liberation of Karabakh, and described it as a sign of the high level of the bilateral relations. President Ilham Aliyev also stressed the importance of mutual support within international organizations, including the UN and the Organization of Islamic Cooperation.

The ambassador conveyed the greetings of the leadership of Bosnia and Herzegovina to the head of state.

President Ilham Aliyev thanked for the greetings, and asked Adis Alagic to extend his greetings to the leadership of Bosnia and Herzegovina.

Noting that he is proud to be appointed ambassador to Azerbaijan, Adis Alagic said that he will spare no effort in expanding the bilateral ties even further during his tenure.

The ambassador emphasized that his country supports Azerbaijan`s defending its territorial integrity in accordance with international law, and the successful restoration of Karabakh. He expressed satisfaction with his visit to Aghdam last year, and his planned visit to Shusha in the coming days. Adis Alagic pointed out that the very strong political relations between the two countries have a very positive effect on the bilateral ties in general. The diplomat said that his country is interested in further strengthening bilateral and multilateral relations with Azerbaijan.