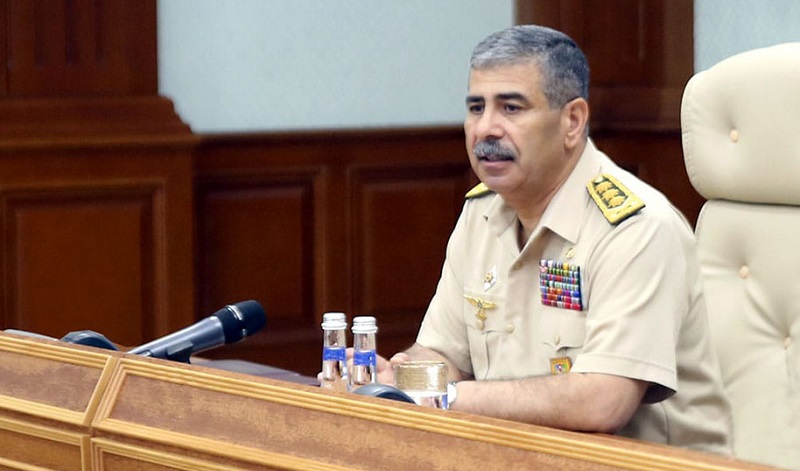 Minister Hasanov delivered to the meeting participants the tasks assigned to the Azerbaijan Army by President, Supreme Commander-in-Chief of the Armed Forces Ilham Aliyev.

The current operational situation on the Azerbaijani-Armenian state border, as well as in the territory of Azerbaijan, where the Russian peacekeeping contingent is temporarily stationed were extensively analyzed.

Emphasizing the tension that may arise as a result of the intensive firing by the Armenian armed forces in the direction of Kalbajar and Lachin regions, the minister ordered to be ready to suppress any provocation immediately and decisively.

He spoke about the work done in order to further improve the service and living conditions, moral and psychological condition of military personnel. Colonel General Z. Hasanov gave relevant instructions on further strengthening ideological work and moral-psychological support so that the troops were constantly ready to accomplish combat missions.

The minister gave instructions to pay attention to the professionalism of the military personnel and the troops’ combat training, increase the intensity of exercises and field training sessions, as well as to maintain the level of units’ combat readiness at a high level.

Emphasizing once again that strict compliance with safety rules during combat duty and daily service activities is important in terms of protecting the health of military personnel, Minister Hasanov instructed to regularly convey these rules to servicemen and constantly control their observance.

Colonel General Z. Hasanov gave instructions to the relevant officers on completing the winter preparatory work in the units according to the plan, and delivering the necessary supplies to the units deployed in mountainous areas.

At the end of the official meeting, high-ranking officers were given specific instructions on organizing the troops’ service, further improving service and social and living conditions, as well as continuing the necessary measures for engineering and medical support.