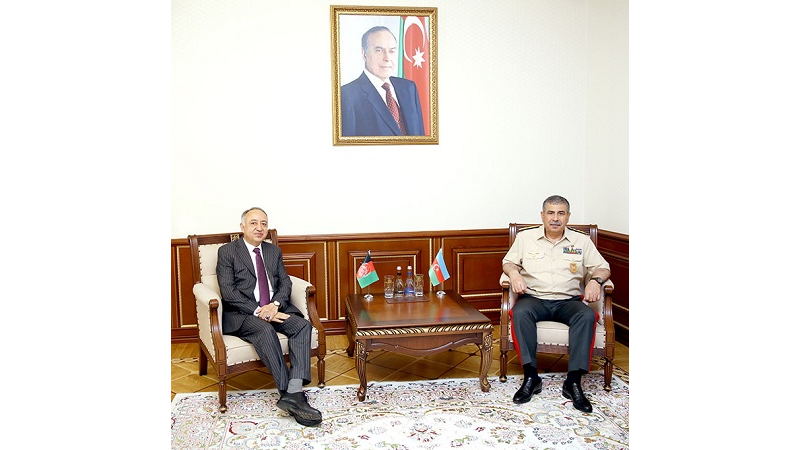 Congratulating the ambassador on the beginning of his diplomatic mission in Azerbaijan, the minister wished him success in expanding cooperation between Azerbaijan and Afghanistan.

Minister Hasanov, emphasizing the role of the heads of states in the development of relations between Azerbaijan and Afghanistan, stressed the successful continuation of bilateral relations in the military sphere.

Noting the participation of Azerbaijani servicemen in the Resolute Support non-combat mission in Afghanistan, Hasanov stressed that besides transport and logistics support to Afghanistan, under the instructions of the President of the Republic of Azerbaijan, Mr. Ilham Aliyev Azerbaijan has also contributed to the NATO mission by providing multimodal transit, training, and financial assistance to the Afghan National Army Trust Fund.

Stressing that Afghanistan has always shown an open position regarding the territorial integrity of Azerbaijan, the minister thanked the brotherly Afghan people for supporting the just struggle of our country.

Jayhoon expressed satisfaction with the beginning of his mission in Azerbaijan as an ambassador and said that he would make every effort for the development of the Azerbaijani-Afghan relationship, in particular for cooperation in the military sphere.

Congratulating our people on the victory in the Patriotic War, Jayhoon, wished the mercy of Almighty Allah to the souls of all servicemen and civilians fallen Shehids (Martyrs), as well as healing to the wounded.

Emphasizing that the two countries have always supported each other's positions in various international organizations, Ambassador Jayhoon thanked the Azerbaijani servicemen for their contribution to the peacekeeping mission conducted in Afghanistan.

During the meeting, the sides discussed the current state of bilateral relations, prospects for the development of military cooperation, particularly in the field of military education, and exchanged views on issues of mutual interest in regional security and defense issues.