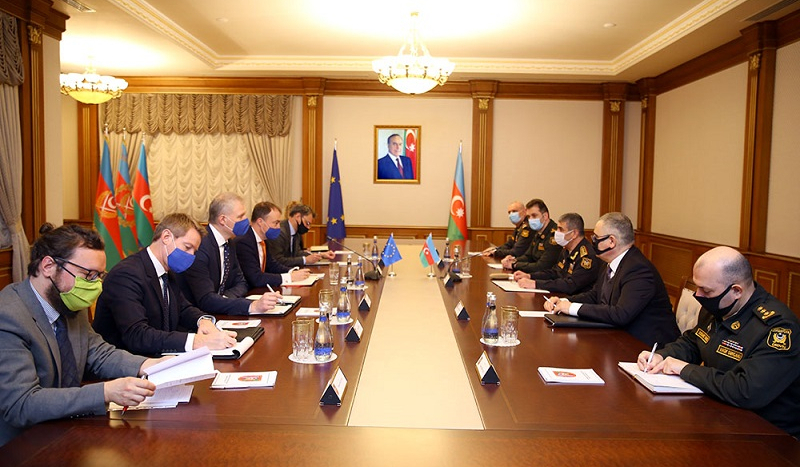 The minister noted that the Patriotic War, which began with a counter-offensive operation ended with a glorious victory of the Azerbaijan Army under the command of President, Supreme Commander-in-Chief of the Armed Forces Ilham Aliyev, and Azerbaijani territories were liberated from occupation.

The minister, informing the guest about the successful military operations carried out by the Azerbaijan Army, emphasized that the combat experience of the Azerbaijani army gained in the 44-day war is being studied by the armies of many countries of the world and the international military experts.

Having seriously condemned the regular shelling of Ganja, Barda, Tartar, and other settlements by the armed forces of Armenia, as well as the targeted killing of the civilian population of Azerbaijan during the war, Hasanov emphasized the importance of making a proper assessment about this issue and taking of relevant measures by the international community against the perpetrators who committed these acts.

Hasanov, emphasizing that Azerbaijan’s settlement of Nagorno-Karabakh conflict lasted almost 30 years by means of liberation of the occupied territories, will contribute to stability in the South Caucasus region, also informed the guest about the activities of the Azerbaijan Army in liberated territories in the post-war period.

Klaar, in turn, noted that he has been closely keeping watch over all armed clashes between Armenia and Azerbaijan, in particular, the war that took place last autumn, and emphasized the importance of maintaining stability in the South Caucasus region. He also stressed that the European Union supports all steps taken in this field.

Expressing his condolences to the families of servicemen and civilians who died as Shehids (martyrs) in the Patriotic War, T. Klaar stressed that the Azerbaijan Army has gained significant experience in this war.

The parties also discussed the new situation in the region, post-war conditions, and a number of other issues.