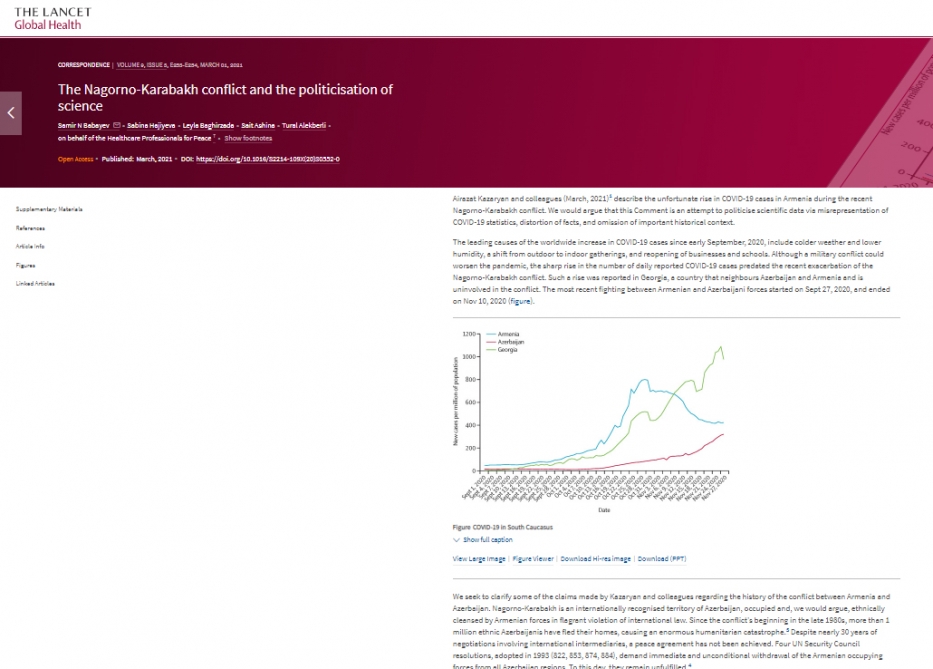 A group of Azerbaijani healthcare professionals have exposed the lies of Armenian doctors published by The Lancet, the medical journal, which also published an article by Azerbaijani doctors in response to the Armenian lies.

The article reads: “Airazat Kazaryan and colleagues (March, 2021) describe the unfortunate rise in COVID-19 cases in Armenia during the recent Nagorno-Karabakh conflict. We would argue that this Comment is an attempt to politicise scientific data via misrepresentation of COVID-19 statistics, distortion of facts, and omission of important historical context.

The leading causes of the worldwide increase in COVID-19 cases since early September, 2020, include colder weather and lower humidity, a shift from outdoor to indoor gatherings, and reopening of businesses and schools. Although a military conflict could worsen the pandemic, the sharp rise in the number of daily reported COVID-19 cases predated the recent exacerbation of the Nagorno-Karabakh conflict. Such a rise was reported in Georgia, a country that neighbours Azerbaijan and Armenia and is uninvolved in the conflict. The most recent fighting between Armenian and Azerbaijani forces started on Sept 27, 2020, and ended on Nov 10, 2020.

We seek to clarify some of the claims made by Kazaryan and colleagues regarding the history of the conflict between Armenia and Azerbaijan. Nagorno-Karabakh is an internationally recognised territory of Azerbaijan, occupied and, we would argue, ethnically cleansed by Armenian forces in flagrant violation of international law. Since the conflict's beginning in the late 1980s, more than 1 million ethnic Azerbaijanis have fled their homes, causing an enormous humanitarian catastrophe. Despite nearly 30 years of negotiations involving international intermediaries, a peace agreement has not been achieved. Four UN Security Council resolutions, adopted in 1993 (822, 853, 874, 884), demand immediate and unconditional withdrawal of the Armenian occupying forces from all Azerbaijan regions. To this day, they remain unfulfilled.

Kazaryan and colleagues mention multiple civilian deaths on the Armenian side during recent hostilities. However, they fail to note that Armenia's attacks on remote, densely populated cities and villages of Azerbaijan led to 414 civilian injuries and 94 deaths. Additionally, the Armed Forces of Armenia used heavy artillery, banned cluster munitions, and long-range rockets in these attacks.

We welcome the ceasefire signed by Armenia and Azerbaijan leaders on Nov 9, 2020, which resulted in the cessation of hostilities, restoration of international law, and the beginning of Armenian troops’ withdrawal from occupied lands.

As health-care professionals, we are all united by universally recognised human rights and belief in the value of human life. The politicisation of science with ethnocentric views undermines the positive effect of science on our lives. It is imperative that we all seek to promote peace and prevent military conflict without using science for political gain.”