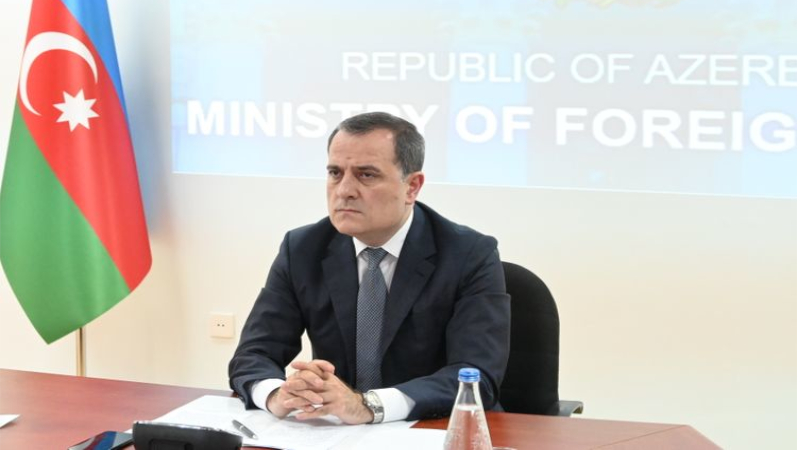 The latest military recklessness on the part of Armenia pursues an objective of undermining the peace talks and continuing the occupation and aggression against Azerbaijan, said Azerbaijani Foreign Minister Jeyhun Bayramov.

He made the remarks Tuesday at a webinar on “Leveraging the Effects of the Pandemic Towards Regional Cooperation in Asia”, the Foreign Ministry told News.Az.

The minister stressed that Azerbaijan continues to suffer from the aggression by Armenia, as a result of which approximately 20 percent of the Azerbaijani territories are occupied by Armenia.

“More than a million Azerbaijanis were forced to leave their historical lands and became refugees or internally displaced persons. The four UN Security Council resolutions demanded an immediate, unconditional, and full withdrawal of Armenian armed forces from the occupied territories of Azerbaijan. However, Armenia continues to disregard these resolutions and other documents of international organizations demanding to cease its occupation and aggression,” he added.

The minister pointed out that while the entire world is mobilized to fight COVID-19 pandemic, Armenia resorts to provocation and diversion attempts to escalate tension.

Bayramov reminded that on July 12, 2020, the armed forces of Armenia flagrantly violated the ceasefire and used artillery to fire on the positions of Azerbaijan’s armed forces in the Tovuz district, along the state border between Armenia and Azerbaijan. “As a result of the attacks 12 servicemen, including one major general, of the Azerbaijani armed forces and 1 civilian have been martyred.”

Such military recklessness on the part of Armenia pursues an objective of undermining the peace talks and continuing the occupation and aggression against Azerbaijan, said the minister, adding. “By doing so, Armenia's leadership aims to escalate the situation, against the backdrop of socio-economic problems deteriorated further by the widespread of COVID-19 pandemic in Armenia, caused by its incompetent performance, and distract attention from the domestic problems in the country.”

He noted that the international response toward the provocation has also been overwhelming.

“Leading international organizations such as the Cooperation Council of Turkic Speaking States and Organization of Islamic Cooperation released statements while the Coordinating Bureau of the Non-Aligned Movement, with the support of its 120 Member States, adopted a communique strongly condemning the attack by the armed forces of Armenia. We would like to express our immense gratitude to brotherly Turkey for demonstrating resolute solidarity in this time of need,” Minister Bayramov added.