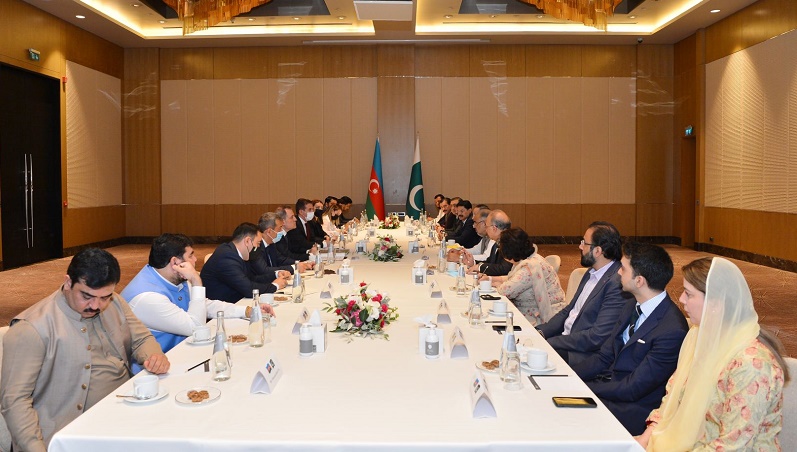 Azerbaijani Foreign Minister Jeyhun Bayramov met with a delegation led by Chairman of the Pakistani National Assembly Asad Qaiser on a visit to Azerbaijan on July 28.

Qaiser conveyed congratulations on the liberation of Azerbaijan's territories from occupation, stressed that the people of Pakistan celebrated this victory together with the Azerbaijani people.

Moreover, Qaiser added that Pakistan always supports the country's position based on international law. Referring to the parliamentary cooperation between the countries and referring to the positive experience of the parliamentary friendship groups, Qaiser said that further expansion of this cooperation will make an important contribution to the development of relations between the two countries.

Qaiser also stressed the active participation of Azerbaijan in the Organization of Islamic Cooperation (OIC) Contact Group on Jammu and Kashmir.

Referring to the meeting of the foreign ministers of the three countries in Islamabad in early 2021, Bayramov stressed that the tripartite format meetings make an important contribution to the development of ties between fraternal countries.

Bayramov added that Azerbaijan supports the solution of the Jammu and Kashmir issue in accordance with the principles of international law and the UN Security Council’s resolutions.

The minister stressed that during the visit, the Pakistani delegation had the opportunity to visit the cultural capital of Azerbaijan – Shusha city, as well as review the scale of destruction in the liberated territories of Azerbaijan.

Bayramov informed the interlocutor about the post-conflict stage, the threat of mines in the liberated territories, the ongoing restoration and reconstruction work.

Bayramov noted that Armenia must stop provocations and start negotiations on border delimitation, which is very important from the point of view of ensuring peace and security in the region.

The sides also exchanged views on the development of cooperation in the economic, trade, humanitarian, energy, transport and other spheres between Azerbaijan and Pakistan.

The issues on regional security and climate change were also discussed at the meeting.