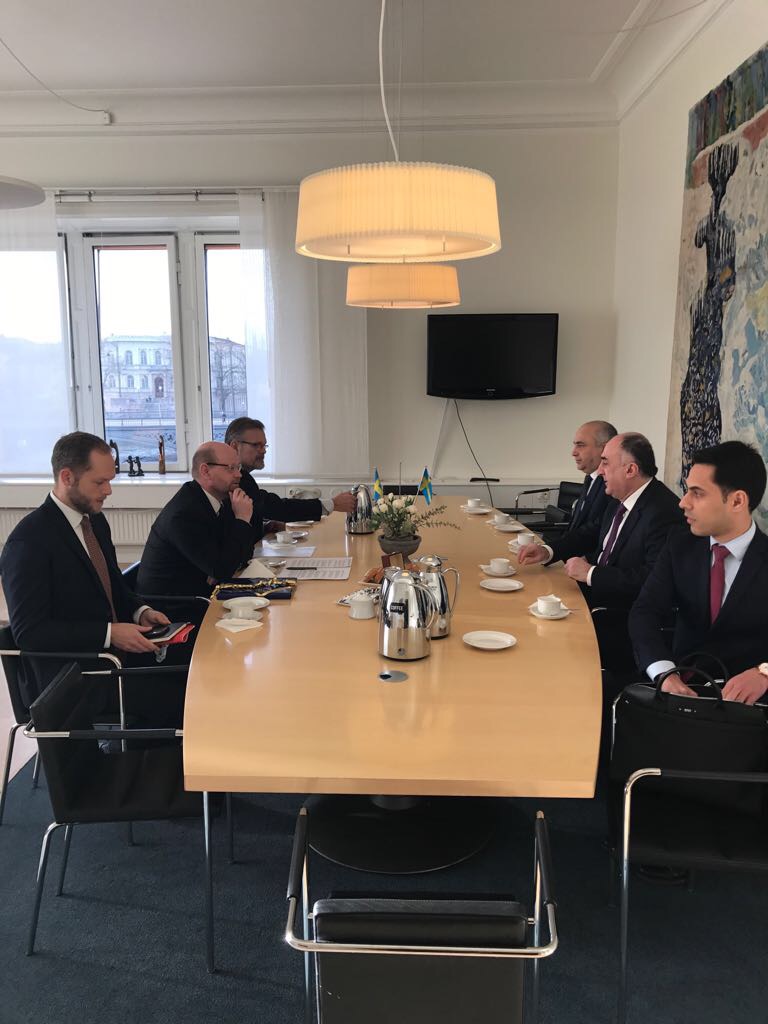 During the meeting the sides exchanged views on the ways to develop bilateral cooperation including exchange of mutual high level visits. It was noted that existing political dialogue based on mutual understanding plays an important role in the development of bilateral relations between our countries, the Foreign Ministry's press service told News.Az.

Talking about strategic road map on development of economy in our country, especially the development of non-oil sector, and about the measures taken to diversify export and conducted the fundamental reforms to this end, Elmar Mammadyarov mentioned that there is a huge potential for the cooperation in science, information and communication technologies, tourism, manufacturing and other spheres between the two countries. In this regard, importance of establishing business relations among business circles of Azerbaijan and Sweden and holding of joint business forums was mentioned.

Informing about Baku-Tbilisi-Kars railway which was inaugurated on October 30, Minister Mammadyarov stated that East-West and North-South international transport corridors, that are implemented with the initiation and participation of Azerbaijan, promise strengthening of inter-continental relations, peace, stability and economic prosperity.

During the meeting Elmar Mammadyarov touched upon the negotiation process on the resolution of Armenia-Azerbaijan Nagorno-Karabakh conflict and drew the attention to the fact that to change the status quo that heads of states of co-chair countries of OSCE Minsk Group declared as unacceptable and unsustainable, the fact of occupation must end and the armed forces of Armenia must withdraw from the occupied territories of Azerbaijan on the basis of the relevant UN Security Council resolutions.

Minister Elmar Mammadyarov also told about violation of human rights of refugees and IDPs of Azerbaijan who were forcefully subjected to ethnic cleansing by Armenia from the places of their origin.

He brought into the attention of Vice-Prime Minister the decision of Council of Europe Court of Human Rights "Chiragov and others v. Armenia" which Armenia refuses to accept and implement.

The relations between EU and Azerbaijan were also discussed during the meeting and it was mentioned that Southern Gas Corridor and its important component - TAP project will have a significant contribution to the European energy security.