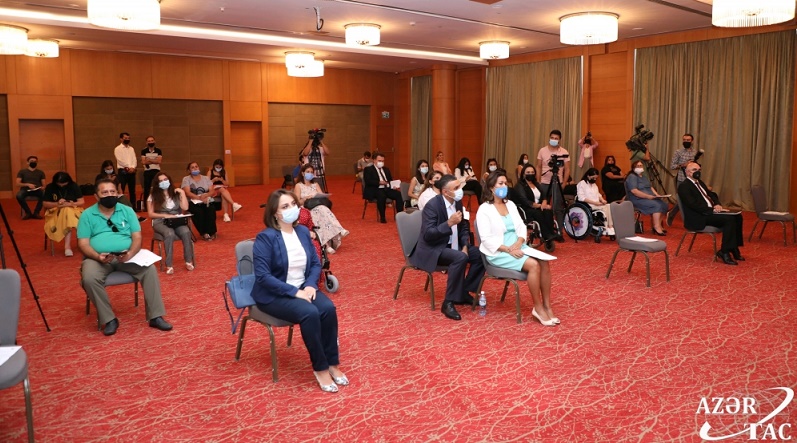 The event was organized in the framework of the project “Addressing the rights and well-being of women with disabilities and veterans of the Karabakh conflict”.

Addressing the event, marking the completion of the campaign, head of the employment policy and demographic development department of the Ministry of Labor and Social Protection of Population Rashad Dayiyev highlighted the importance of the project and its valuable contribution to the efforts implemented by the government to ensure the rights and welfare of vulnerable groups of the population. He also stressed the significance of the media campaign implemented within the project.

Head of the UNFPA country office in Azerbaijan Farid Babayev said that orientation trainings had been delivered to the groups over the past five months bringing together a total of 50 persons with disabilities and media representatives involved in the campaign. "The campaign participants strived to promote the idea of creation of access and equal opportunities for people with disabilities via different media products produced in the framework of the action", Babayev mentioned.

Speaking at the event, UNDP Deputy Resident Representative in Azerbaijan Charu Bist noted that the media could be a vital instrument in raising awareness, countering stigma and misinformation. “It can be a powerful force to change societal misconceptions and present persons with disabilities as individuals that are part of human diversity,” she emphasized.

The campaign, conducted by “Education HUB” LLC, aimed to contribute to the efforts on elimination of discrimination and stigma against women with disabilities and veterans of the Karabakh conflict and to create a favorable environment for their integration into society and promote inclusion.

As part of the media campaign, groups bringing together a total of 50 women and men with disabilities, including veterans of the Karabakh conflict and media representatives from Baku, Salyan and Masalli were formed. In April 2021, the groups received series of online orientation training. The groups then developed PSA videos and media articles on the topics related to creating a conducive environment for people with disabilities and promoting inclusion. Throughout the preparation of the media materials, the groups were supported by professional mentors. At the end of the campaign, the jury selected the best works created by the groups during the campaign and awarded the first three winning places with AZN 900, AZN 600 and AZN 300, respectively.

The project “Addressing the rights and well-being of women with disabilities and veterans of the Karabakh conflict” is a two-year project covering 2019-2021. The main goal of the project is to support the efforts of the Azerbaijani government to protect, ensure and implement social security rights of persons with disabilities, with a special focus on women and veterans of the Karabakh conflict.