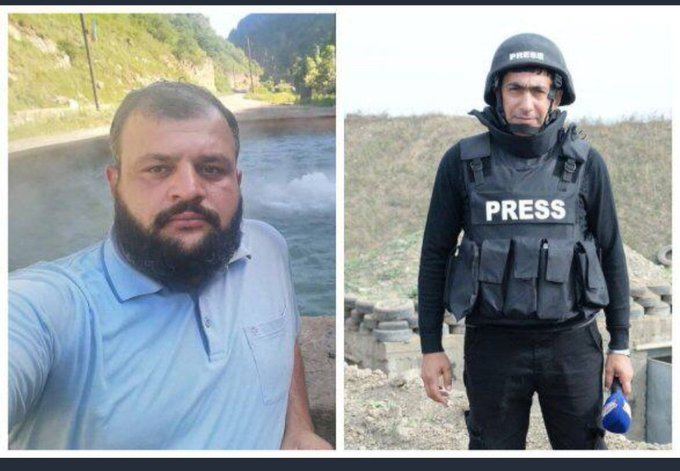 “Media representatives play an important role in the dissemination of unbiased and objective information from the territories where the war ended. With a feeling of great regret, we report that on June 4 in the village of Susuzlug of the Kalbajar district, the operator of the Azerbaijan Television and Radio Broadcasting CJSC (AzTV) Siraj Abishov, a correspondent of the Azerbaijan State News Agency (AZERTAC) Maharram Ibrahimov were killed by a mine explosion. Also, four people were injured," said the appeal.

"After the end of the second Karabakh War, more than 140 people were blown up on mines planted by the Armenian occupants in the liberated territories of Azerbaijan, 27 of them have died. The tragedy that happened testifies to the fact that Armenia continues to pursue an insidious policy in the region, to mine roads in the liberated lands of Azerbaijan. In the region, there is a serious threat to civilians, including representatives of the media, performing their official duties, and this situation seriously worries us, journalists."

The authors of the document noted with regret that international NGOs, journalist associations, in many cases acting as defenders of the rights of journalists, do not react to such crimes, preferring to remain silent.

"We, Azerbaijani journalists living abroad, appeal to international structures, including the UN, the Council of Europe, as well as to human rights organizations such as Amnesty International and Human Rights Watch, and declare that the Armenian Armed Forces did not provide maps of minefields [to Azerbaijan]. Moreover, they secretly penetrate into the territory of Azerbaijan and continue to mine it, which seriously violates humanitarian norms and principles, human rights. As a result of these criminal actions, civilians are killed, including representatives of the media. Therefore, we demand that Armenia provide maps of minefields, stop mining the territories within the internationally recognized borders of Azerbaijan," the appeal said.

The appeal was signed by Azerbaijani journalists working for Turkish Haber Global, Turkmedia Grup, Real TV, voicepress.com.tr, as well as those working in Russia, Norway, Poland, Sweden, and Georgia.

As earlier reported, a car with employees of Azerbaijani TV channels and news agencies sent to the Kalbajar district was blown up by an anti-tank mine in the direction of Susuzlug village at about 11:00 on June 4.

As a result, the operator of the Azerbaijan Television and Radio Broadcasting CJSC (AzTV) Siraj Abishov, a correspondent of the Azerbaijan State News Agency (AZERTAC) Maharram Ibrahimov, the deputy representative of the Mayor’s Office of the Kalbajar district in the administrative-territorial district of Susuzlug village Arif Aliyev were killed.

Also, four more people got injured and were hospitalized.