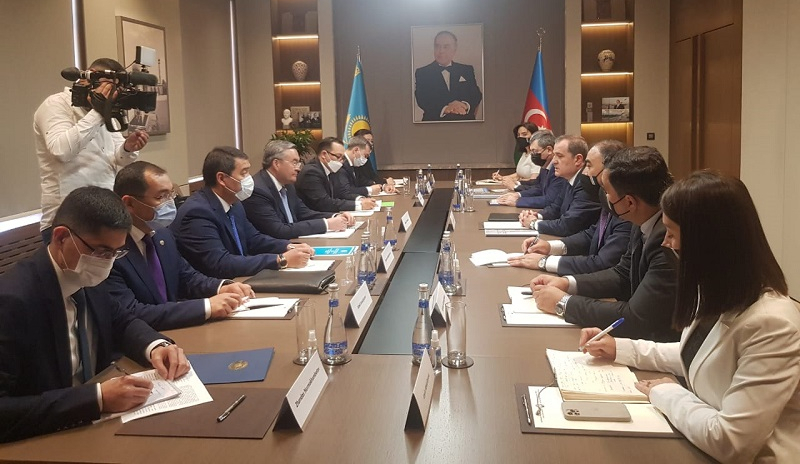 On June 21, Azerbaijani Foreign Minister Jeyhun Bayramov met with Deputy Prime Minister, Minister of Foreign Affairs of the Republic of Kazakhstan Mukhtar Tileuberdi, during his official visit to Azerbaijan.

During the meeting with the participation of delegations from both sides, the sides exchanged views on fruitful cooperation between the two countries in bilateral and multilateral formats, as well as regional security issues.

Minister Jeyhun Bayramov noted the historically established traditional ties of friendship, cooperation and mutual support between the two peoples, emphasizing the dynamic development of relations between Azerbaijan and Kazakhstan, built on a solid foundation.

Expressing satisfaction with the visit to brotherly Azerbaijan, Deputy Prime Minister and Minister of Foreign Affairs of Kazakhstan Mukhtar Tileuberdi referred to the meeting with the President and the comprehensive and fruitful exchange of views. He stressed the importance of the high-level political dialogue between the two countries.

The Ministers discussed bilateral cooperation between the two countries in many areas, including economic and trade, investment, transport, transit, humanitarian, cultural, tourism and other fields, and their development prospects. It was noted that it is important to take appropriate measures to achieve the growth of trade and economic relations as soon as the restrictions related to the pandemic are lifted, in particular, to hold the next meeting of the Joint Intergovernmental Commission on Trade and Economic Cooperation.

Minister Jeyhun Bayramov briefed his Kazakh counterpart on the post-conflict situation in the region, the deliberate destruction in the occupied territories for decades, the threat of landmines, as well as the restoration and reconstruction work carried out in the liberated areas.

The Ministers discussed issues of expanding cooperation with international organizations, including the UN, the OSCE, the Turkic Council, the Conference on Interaction and Confidence-Building Measures in Asia (CICA) and others.

Evaluating the signing of the Convention on the Legal Status of the Caspian Sea as a great success, the sides noted the importance of continuing discussions within the framework of high-level working group and ratification of the Convention.

The sides stressed the importance of high-level reciprocal visits for the further development of relations.

Taking into account that next year will mark the 30th anniversary of the establishment of diplomatic relations between the two countries, Minister Tileuberdi invited his Azerbaijani counterpart to pay an official visit to Kazakhstan.

At the meeting, other issues of mutual interest were also discussed.