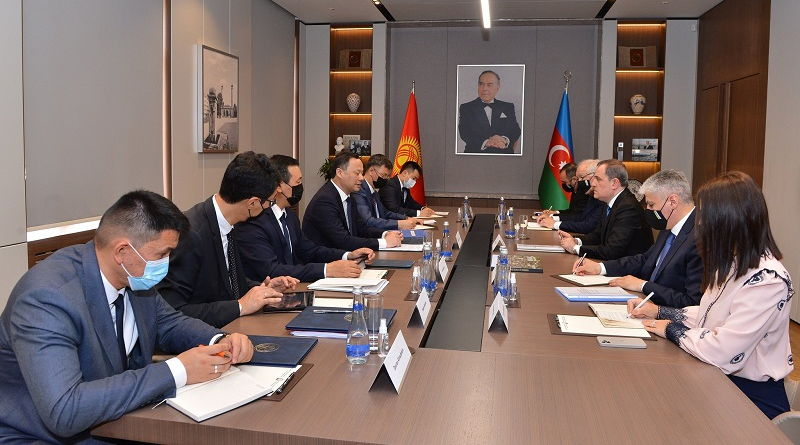 Azerbaijan’s Foreign Minister Jeyhun Bayramov on Friday met with Kyrgyz counterpart Ruslan Kazakbaev, who is on an official visit to Baku, the Foreign Ministry told News.Az.

At the meeting, which was attended by a large delegation from both sides, issues on the agenda of bilateral cooperation between Azerbaijan and Kyrgyzstan, cooperation within the framework of international organizations, as well as regional security issues were discussed.

Welcoming his counterpart Minister Bayramov noted that the existing historical, cultural and religious ties between the peoples of Azerbaijan and Kyrgyzstan form the basis of relations between the two countries and expressed satisfaction with the development of bilateral friendly relations and cooperation. The impetus of high-level visits between the two countries to the development of relations was noted. The minister stressed that the support of the friendly country of Kyrgyzstan to the just position of Azerbaijan based on international law is highly appreciated.

Minister Kazakbaev noted the historical ties and fraternal relations between Kyrgyzstan and Azerbaijan and emphasized the successful development of relations on bilateral and multilateral platforms. Noting the importance of relations with Azerbaijan, the Kyrgyz minister expressed interest in raising bilateral relations to the level of strategic partnership.

The ministers discussed many aspects of the bilateral agenda, expansion of economic and trade relations, cooperation in transport and transit, including the attraction of investors to the Alat Free Economic Zone, as well as prospects for cooperation in agriculture, tourism, humanitarian, culture and education. The importance of supporting the activities of the Joint Intergovernmental Commission and holding business forums was emphasized.

Minister Bayramov briefed his counterpart about the situation in the region after the conflict, especially the decades-long demolition of the liberated areas, the destruction of historical and cultural heritage, huge damage to the environment, as well as the threat of landmines. He informed about the ongoing restoration and reconstruction activities in these areas.

The sides also exchanged views on opportunities for expanding bilateral cooperation and the celebration of the 30th anniversary of the establishment of diplomatic relations next year.