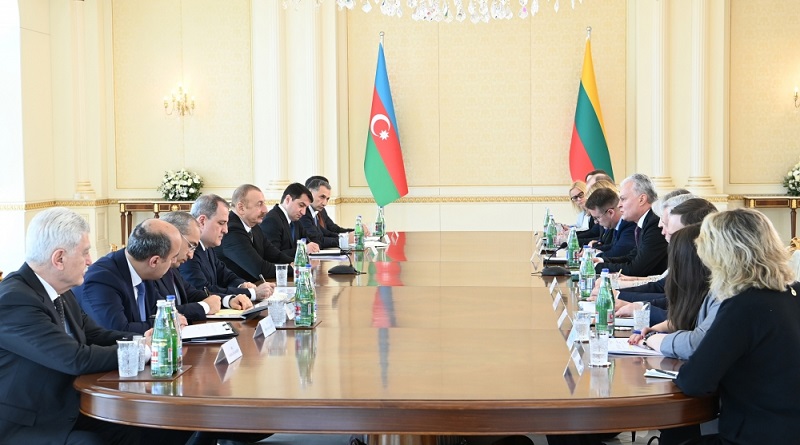 “We see that there is a big similarity in our views. With respect to the development of bilateral ties, we are very optimistic. We discussed with Mr. President the areas in the economic sector which we consider to be promising and today, members of delegations I think already started their communication and we will continue it. Because it is important to establish direct personal contacts between people who are responsible for different areas,” the head of state noted.

The Azerbaijani president also expressed gratitude to the Lithuanian government and president for supporting Azerbaijan’s plans with respect to close cooperation with the EU.

“Thank you Mr. President. Really, you already mentioned the issues we had the opportunity to discuss and among them security situation in the region and broadly speaking, then our cooperation in many fields and economic cooperation is especially important. This is the reason why together with me there is a delegation of our vice ministers, vice minister of economy, transport and education is together and vice minister of agriculture,” he said.

“We already described the areas which could be very promising, especially just seeking for larger trade turnover between our countries. I already saw that import from Azerbaijan increased several times. Unfortunately, it was not a case regarding our export but, anyway, we are happy that you are doing well. But speaking seriously, I see the big potential to increase our cooperation in the fields which are becoming more and more important for Lithuania and those are the sectors with high value added,” the Lithuanian president added.