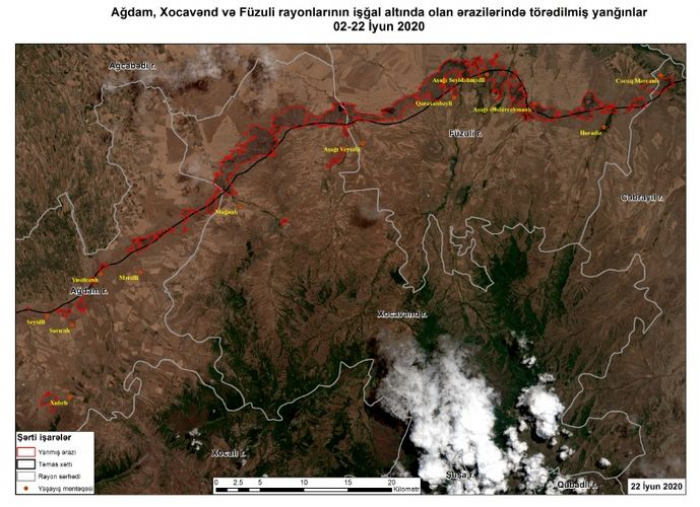 Azerbaijan’s Ministry of Foreign Affairs and Azercosmos OJSC have issued a joint statement regarding the satellite monitoring of arsons committed in the occupied territories of Azerbaijan.

The analysis of images obtained during the monitoring by Azercomos’Azersky satellite of the fire set to the occupied Azerbaijani territories by Armenia in June 2020 revealed that arsons were committed in the occupied Goyarkh village of Azerbaijan’s Tartar district and in the vicinity of this village, read the statement.

The satellite images obtained show that the Armenians set fire to nearly 866-ha area on the abovementioned territories.

“Furthermore, it was revealed that since June 2020, large arsons had also been committed in the occupied Khidirli, Seyidli, Sarijali and Yusifjanli residential settlements of Azerbaijan’s Aghdam district, as well as in Ashaghi Veysalli, Garakhanbeyli, Ashaghi Seyidahmadli, Ashaghi Abdurrahmanli and Horadiz villages of Fuzuli district. As a result of the ecological terror committed by the Armenian side, the area of fire spread reached 2,422 hectares,” said the statement.

“Armenia, which continues its illegal activities in the occupied Nagorno-Karabakh and surrounding regions by flagrantly violating international law and Azerbaijani laws, as well as other individuals and legal entities involved in these actives, bear administrative and legal responsibility.”

“The occupation of the Azerbaijani territories is temporary, and these lands will be returned to the control of Azerbaijan. The occupant Armenia will compensate for the damage caused to Azerbaijan and will be accountable for all its illegal actions,” the statement said.