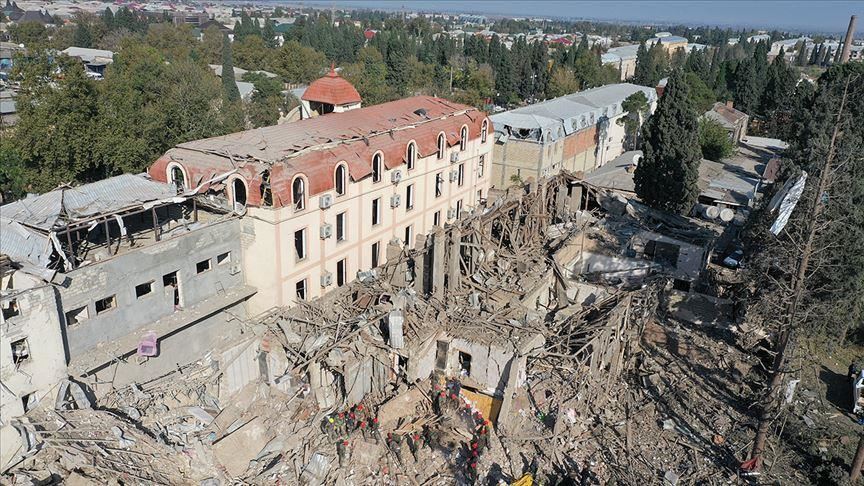 Azerbaijan’s Human Rights Commissioner (Ombudsman) Sabina Aliyeva has released a statement on the anniversary of human casualties and destruction as a result of the second shelling of the Azerbaijani city of Ganja by the Armenian armed forces, the Ombudsman’s Office told News.Az.

The statement reads: “On October 11, 2020, at around 2 a.m., for the second time, the armed forces of Armenia using the prohibited Scud-B ballistic missile system, which is considered an indscriminate weapon, fired on apartment buildings in the central part of the Azerbaijani city of Ganja, located far from the zone of active hostilities. As a result, dozens people, including children, women and the elderly, were killed and injured, and numerous civilian infrastructure facilities were severely damaged.

Deliberate targeting by Armenia of civilian population grossly violates international humanitarian law, in particular the provisions of the IV Geneva Convention and the Hague Convention for the Protection of Cultural Property in the Event of Armed Conflict, as well as the humanitarian ceasefire declared on October 10, 2020.

As the Ombudsman, I immediately appealed to influential international organizations and the world community regarding the regular shelling of civilian facilities in Ganja by the armed forces of Armenia, also numerous casualties, and mass violations of human rights and freedoms.

At the same time, I have conducted another fact-finding mission in Ganja city, investigated the facts of violations of the rights of people killed, wounded and subjected to sufferings as a result of damages during the next military attack by Armenia, and submitted a report to international organizations.

Our statements of protest addressed to international organizations and fact-finding mission reports contain undeniable pieces of evidence. However, such facts of mass violations of human rights and freedoms during military operations have not yet been assessed by international law.

In connection with the first anniversary of the loss of life and destruction as a result of the second shelling of the city of Ganja by heavy artillery, I once again call on the world community to give an international legal assessment to the facts of gross violations of the norms and principles of international humanitarian law by Armenia and to take appropriate punitive measures against the Armenian military-political leadership responsible for these acts of crime.”

This statement is addressed to the UN Secretary-General, UN Security Council, UN Office of High Commissioner for Human Rights, UN Office of High Commissioner for Refugees, UN Human Rights Council, the United Nations Children’s Fund, the United Nations Educational, Scientific and Cultural Organization, European Union, Council of Europe, Organization for Security and Co-operation in Europe, International and European Ombudsman Institutions, Asian Ombudsman Association, Organization of Islamic Cooperation and the Ombudsman Association of its member states,  Independent Permanent Human Rights Commission of the Organization of Islamic Cooperation, European Network of Ombudspersons for Children, International Peace Bureau, different ombudsmen and national human rights institutions, embassies of the Republic of Azerbaijan in foreign countries and the foreign embassies in Azerbaijan, as well as to the Azerbaijani Diasporas.