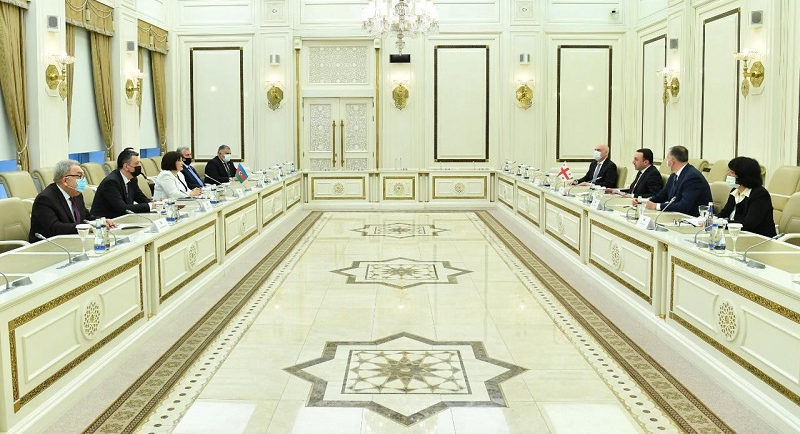 Speaker of the Azerbaijani Parliament Sahiba Gafarova held a meeting with a delegation led by Prime Minister of Georgia Irakli Garibashvili, according to the parliament’s press service.

Gafarova greeted the guests sincerely before describing Azerbaijan and Georgia as neighbors and friendly countries whose friendship has the centuries-old history.

"Our nations supported each other throughout centuries. There are many Georgians in Azerbaijan and many Azerbaijanis live in Georgia; they make integral parts of the corresponding societies and play the role of a certain bridge connecting our countries between which there are strategic partnership and alliance today," she pointed out.

Gafarova also said the documents that Azerbaijan and Georgia have signed provide a powerful legal framework for the versatile bilateral co-operation.

"Georgia is an active participant of the projects implemented by Azerbaijan as is demonstrated vividly by such initiatives as the Baku-Tbilisi-Ceyhan oil pipeline and the Baku-Tbilisi-Erzurum gas pipeline," the speaker said.

Gafarova went further to underscore the commendable co-operation between the two parliaments each of which has a friendship group in action. She said the co-operation is expanding bilaterally and multilaterally; the two sides’ delegations interact with success under the auspices of international interparliamentary institutions.

Speaking on her behalf and on behalf of the parliament deputies, she thanked Georgia for supporting Azerbaijan during the 44-day Second Karabakh War, before stressing that the Karabakh conflict is now history.

"Our country is busy restoring and rebuilding the liberated territories already. However, Armenia will not desist from its policy aggression and now will not release minefield maps, which results in numerous military and civilian deaths and injuries. This is Armenia’s way of attempting to hinder the restoration work and the internally displaced people’s eventual return to the native lands. Such conduct on the part of Armenia poses serious threats to the progress of the region," she said.

Georgian PM Irakli Garibashvili thanked Gafarova for the warm welcome and talked with satisfaction of the conversations held during the visit. The guest stressed that he considered Azerbaijan as a home country.

"Georgia is a friend of Azerbaijan and so it will remain," Garibashvili said.

“The on-going expansion of the two parliaments’ mutual relations serves the common interests of the two nations; reciprocal visits and regular meetings of our deputies matter much in this regard,” Garibashvili added.