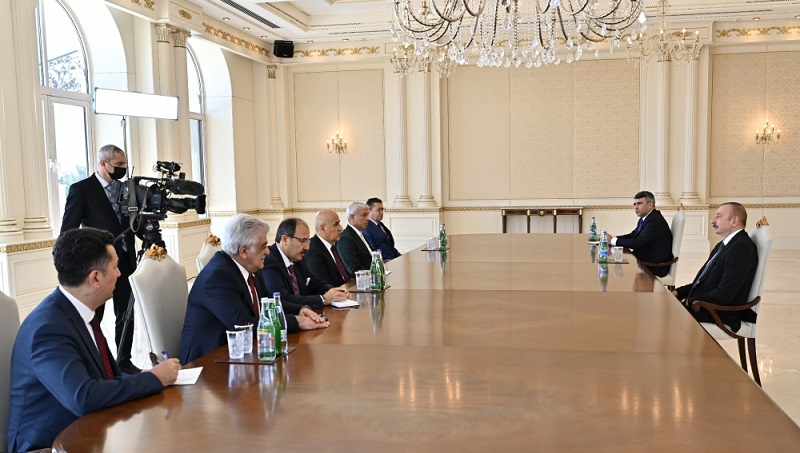 President Ilham Aliyev thanked for Recep Tayyip Erdogan`s greetings, and asked the minister to extend his greetings to the Turkish President.

During the conversation, the sides recalled with satisfaction President Ilham Aliyev's visit to Turkiye a few days ago, pointing to the role of this visit in the development of bilateral relations.

President Ilham Aliyev congratulated Vahit Kirisci on his appointment as Minister of Agriculture and Forestry of Turkiye and wished him success in his activities.

Vahit Kirisci thanked President Ilham Aliyev for the congratulations and said that he was paying his first visit to brotherly Azerbaijan as minister.

The sides noted that friendly and fraternal relations between the two countries were successfully developing in all spheres and that agriculture was high on the agenda of this cooperation.

President Ilham Aliyev noted that everything related to agriculture had been destroyed in Azerbaijani territories occupied by the Armenians, adding that large-scale agricultural work was planned on the liberated lands and other areas. In this regard, the sides noted with satisfaction that close cooperation and joint activities in the field of agriculture were currently underway in the liberated territories.

During the meeting, the sides noted the importance of the Caspian Agro 2022 International Agricultural Exhibition held in Baku and the participation of a delegation led by the Turkish Minister of Agriculture and Forestry in this exhibition, adding that Turkish companies were extensively represented at the exhibition. The sides also expressed confidence that the visit of Vahit Kirisci to Azerbaijan would contribute to the expansion of bilateral cooperation.